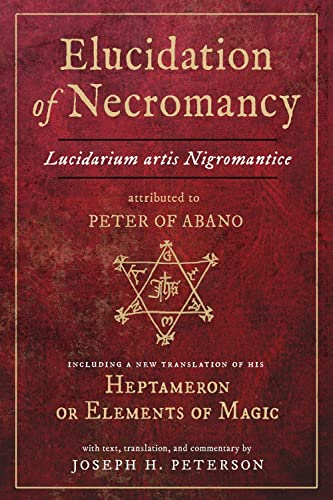 Yesterday saw the publication of a new edition of Peter Albano’s Elucidation of Necromancy (Lucidarium artis Nigromantice) , translated, notated and commented upon by Joseph Peterson. The posted description says:

Since it first appeared over 500 years ago, the Elucidation of Necromancy (Lucidarium artis Nigromantice) and the closely related Heptameron have become essential guides for individuals seeking to call on angels and other supernatural beings for help. Countless amulets and pendants have been made with its designs, and elements have repeatedly been adapted and incorporated into other manuals of ritual magic. In spite of this, neither a critical edition nor a translation has been previously published. In particular three manuscripts of Lucidarium have come to light recently, which provide a clearer and fuller ritual than the printed Heptameron. For example, they add critical instructions for making the seven angel sigils, which have become so widely known. Together they bring to life this important current of esoteric tradition, showing how it has been repeatedly adapted and used by different individuals for centuries.

Joseph H. Peterson has translated many esoteric and religious source works. He has amassed a large collection of rare and occult tracts for comparative research from the British Library and other institutions, which he shares on his award-winning websites esotericarchives.com and avesta.org. Peterson’s published works include John Dee’s Five Books of Mystery, The Sixth and Seventh Books of Moses, The Secrets of Solomon: A Witch’s Handbook from the Trial Records of the Inquisition. 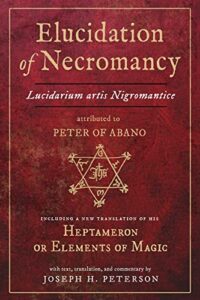 The perfect stocking stuffer, no?