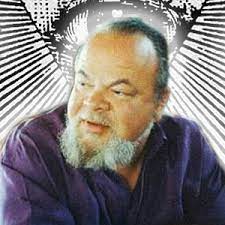 The text that accompanies the footage says:

“Christopher S. Hyatt, Ph.D., Adv. M.ED. was trained in experimental and clinical psychology and practiced as a psychotherapist for many years. As Alan Miller, he used the 18 units earned from his military GED towards his first academic career at Los Angeles City College, where he studied accounting for two years. He later changed his graduate to General Psychology, earning Masters Degrees in Experimental Psychology and Medical Education and Counselling. He was a member of a Freudian clinic in Southern California. He spent almost a year studying hypnosis at the Hypnosis Motivation Institute in Los Angeles and also studied hypnosis at the University of California, Irvine. Miller possessed Ph.D.s in both Clinical Psychology and Human Behavior and was a Postdoctoral researcher in Criminal Justice. Some of his techniques blended Reichian physiotherapy and tantric yoga. He also incorporated hypnosis alongside his body work with patients and students.

“According to his website: ‘He left academia and state sponsored psychology to become an explorer of the human mind.’ Hyatt claimed on his website that as a research scientist he had published ‘numerous’ peer reviewed articles in professional journals and was a Research Fellow at the University of Toronto and the University of Southern California. However, his website does not provide any references or name any of the journals he claims to have published in, making verification of his academic credentials difficult.

“Christopher Hyatt died of cancer in Scottsdale, Arizona at the age of 64.”