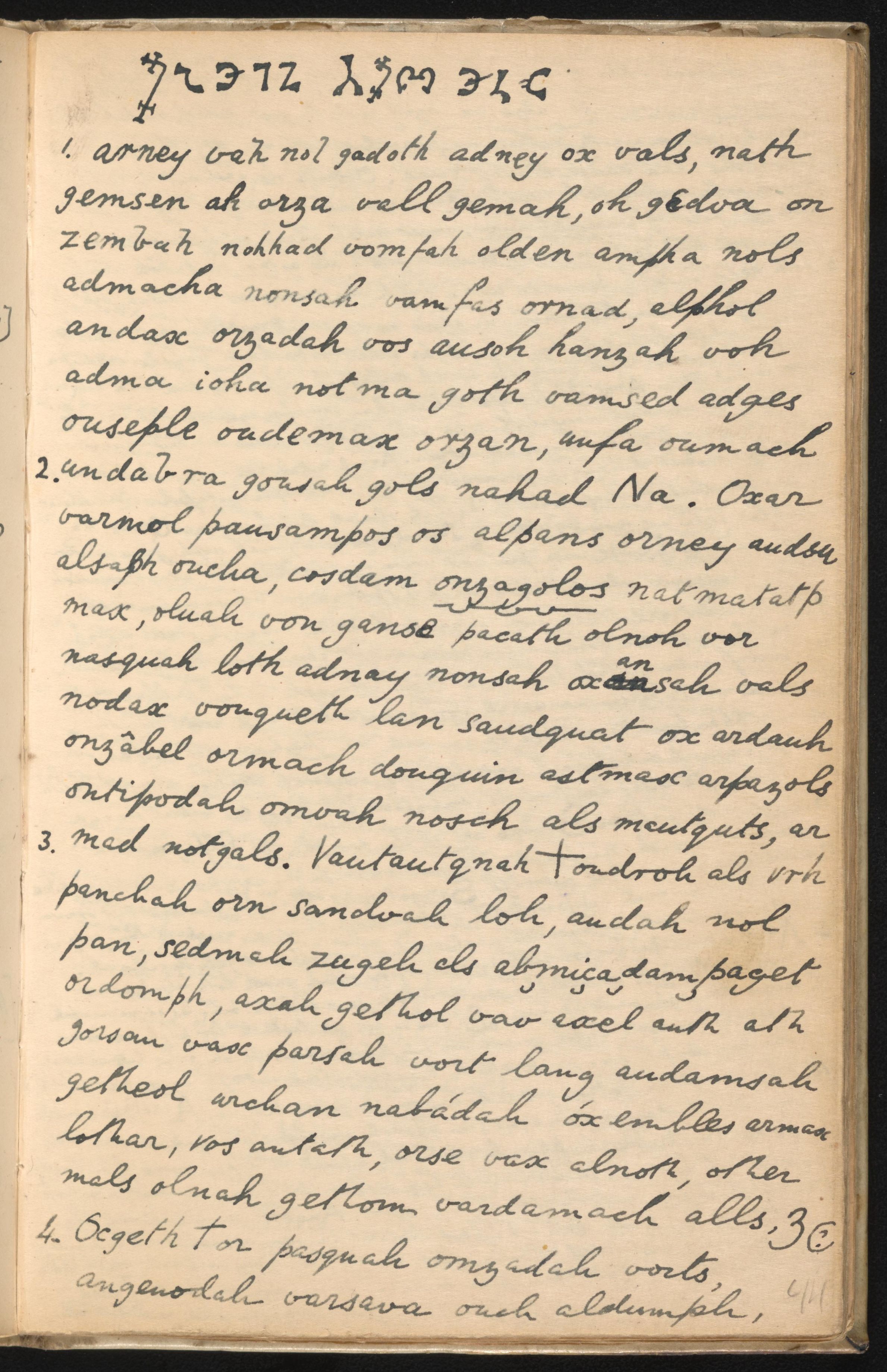 Liber Loagaeth (pronounced Logah), meaning “The Book of the Divine Speech of God”, is at the core of the Enochian, or more properly stated, Heptarchial system.  This system reports to be the most powerful form of magick ever revealed to humanity, and though this is arguably true, much of the system remains obscure.  There is also debate regarding certain aspects of the system primarily due to the work of the Golden Dawn and Aleister Crowley, both of whom take liberties in introducing external concepts.

Controversy aside, Liber Loagaeth is the single most mysterious aspect of all of Dee and Kelly’s work.

The entirety of Loagaeth is recorded in an undecipherable speech by which it is said that the cosmos were created and by which it shall be annihilated.  It is variously referred to as the Book of Enoch or Liber Mysteriorum Sextus et Sanctus, and is thought to be synonymous with the “Book of the Lamb” described in Revelations, sealed with seven seals, and which may only be opened by the Christ during the final tribulations.

Further, it is said that knowledge of this text was first given to Enoch, which is ultimately why this system has become widely known as the Enochian.  Dee would describe the language of Loagaeth as the “Celestial Speech” and “Adamical” because, it was believed to be used by Adam in the Garden to name all things.

Crowley copied Liber Loagaeth while studying the Enochian material found in Elias Ashmole’s collection held at the Bodleian Library at the University of Oxford.  In the early part of November 1909, just days before he would leave for Algeria with Neuburg, Crowley would visit the library and painstakingly copy this liber into the journal presented here.  But it is not known how, or if ever, he intended on using it.

Regarding Liber Logaeth, what we know is that about a year into Dee and Kelly’s work, in April of 1583, Kelly had a vision of a special book –bound in blue silk, containing 49 golden leaves filled with grids and angelic characters, written in blood, and bound in reverse.

On Good Friday, 1583, the Angel Raphael began to transmit the contents of Liber Loagaeth letter by letter, in a manner so tedious that Dee refused to continue, at which point the method of revelation changed so that the words were simply spoken aloud and then recorded phonetically.  In the end, several Angels would speak to Kelly over the course of this transmission, resulting in 49 pages of angelic text.

The method of reception was as follows:  Kelly, who was a gifted medium, would enter a trance by staring into the “shew-stone” (likely, a small, clear crystal ball) until such a time that a “sword of flame” would pierce into his head – causing him to sweat profusely.  (That is to say, a light visible to both Dee and Kelly would fly out of the shew-stone and into Kelly’s head.)  While in this trance, Kelly was able to fluidly speak and write in the angelic language of the Loagaeth, yet was sternly warned not to provide a translation.  The explanation given was that God would select the time and place for its revelation. Allegedly, when Kelly returned to normal consciousness, he would have no recollection whatsoever of the experience.  Nevertheless, over the course of the transmission, the meaning of a few words was given.  However, what few words we do know are insufficient to provide a full translation or even gather a basic idea of the overall meaning of the text, and all modern attempts have failed.

Despite the similarities, the calls of Liber Loagaeth are not recorded in the same language commonly denoted as Enochian and later utilized by the Golden Dawn and others.  Many scholars have concluded that it is not a language at all as we know it, as it lacks many of the tell-tale patterns and repetitions, and there is no apparent or consistent grammar that can be identified.  Donald Laycock remarks that the language is highly alliterative and repetitively rhyming, while Robert Turner calls it glossolalic in nature, as if one is speaking in tongues.

On Easter of 1583, Dee recorded in his journal, “Every element of the book hath 49 manner of understandings.  Therein is comprehended so many languages.  They are all spoken at once, and severally, by themselves, by distinction many be spoken.  Until thou come to the City, thou canst not behold the beauty thereof.”

Such a language would be untranslatable.

The purpose of Loagaeth was said to be the ushering in of a new age on Earth, it being the last age before the end of all things.  However, instructions for using it to that effect were never given and based upon the complexity of its language, it is unlikely that it will ever truly be understood.

In the spring of 1912 Crowley would publish “A Brief Abstract of the Symbolic Representation of the Universe Derived by Doctor John Dee through the skrying of Sir Edward Kelly” in volume I, number VII of The Equinox.  This was the first of the Enochian papers Crowley would publish, and there, in a prefatory note, he mentioned Liber Loagaeth along with other matter that he hoped to address in a “subsequent article”. *(There is some evidence that suggest he was working with Thomas Windram in this regard).  This demonstrates that nearly two years after he recorded Liber Loagaeth in his journal, he was still interested in the matter.  The subsequent edition of The Equinox (number VIII) included part two of this work; however, it still did not address the topic of Liber Loagaeth.

In the fall of 1913, Crowley would release “A Syllabus of the Official Instructions of A.’.A.’. hitherto Published”, in volume I, number X of The Equinox.  It is here, for the first time, that parts one and two of “A Brief Abstract of the Symbolic Representation of the Universe…” are united as one as “Liber LXXXIV – vel Chanokh” an official publication of the Order in Class B, meaning that it is the result of ordinary scholarship, enlightened and earnest.  There, Crowley appends the following note to its description: “Its publication is at present incomplete”— meaning that four years after the fact, Crowley was still hoping to include Liber Loagaeth at some point down the line.

I spent in excess of three months’ time down many a rabbit hole in my own quest to decipher this liber.  I read all the latest books and articles and entertained all sorts of fanciful theories — a few quite good!  In fact, I rather enjoyed the theory that Liber AL,  Liber Loagaeth, and the little red book mentioned in the Revelations of St. John are all somehow interrelated, but in the end, none of the theories I encountered proved to be authoritative or conclusive.

In the hope of discovering some overlooked shred of information that might help make sense of all this, I contacted some friends, a few of whom are well-known authors and experts in this field, and to my surprise none were aware that Crowley had a copy of Liber Loagaeth.  Most contacted did not even want to venture a guess as to how the Great Beast may have utilized it, a matter especially muddled (as several pointed out) by the fact that much of Crowley’s understanding of the material stemmed from Golden Dawn usage.  On the other hand, this document, along with others, clearly demonstrates that Crowley directly studied at least some of the source material, and as one scholar pointed out to me, “it’s not like the Golden Dawn got everything wrong”.

I should here point out that I found the work published by Aaron Leitch quite beneficial in my research and I highly recommend his books on the matter.  I would also like to give a special shout out to Scott Stenwick, who put forth the most viable of the theories (in my opinion) as to how Crowley may have applied it ritually.  I myself theorized somehow incorporating the material in my own spinoff of the Fifty Gates of Understanding.

However, all of this is just conjecture, and if Liber Loagaeth is at all what it purports to be, or if the Heptarchial system of Dee and Kelly is truly the most powerful Magick in existence, then maybe it is best that much of this remains a mystery.

In conclusion: Though Crowley had high hopes of commenting upon Logaeth, he likely faced many of the same obstacles that all have faced when attempting to decipher this liber, and like all those who came before and since, he was left bewildered – with more questions than answers – but fascinated, nonetheless.