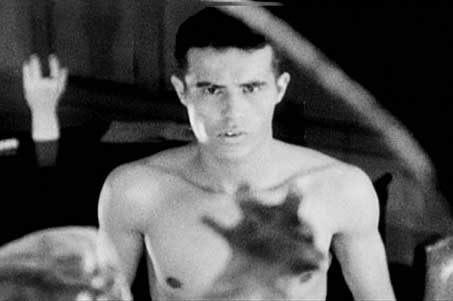 Several year ago he told Another Magazine:

“I was raised a Presbyterian, but rejected Christianity at the age of eight, when my parents tried to make me go to Sunday school. It was not an ideological position; I just wanted to read the Sunday funny papers. It wasn’t until I was a teenager that I became interested in the occult, after reading Sir James George Frazer’s The Golden Bough, a comparative study of mythology and religion. Soon after that, I was introduced to the works of Aleister Crowley by Marjorie Cameron, a very good friend who was also, without any doubt, a genuine witch, in a good sense. She had what you’d call “powers”. She was married to Jack Parsons, a pioneer in developing the rocket fuel that would later take man to the Moon. After his death in 1952, Marjorie and I lived together and studied the Crowleyian teachings. Crowley, one of the most extraordinary Englishmen of the Edwardian – or indeed any other – era, was a poet, mountaineer, ritual magician and libertine who created his own religion and philosophy, Thelema. The word, in classical Greek, signifies the appetitive will; desire, sometimes even sexual. Unsurprisingly, the British yellow press deemed him “the wickedest man in the world”. That was part of his aura, his halo. His attitude toward sex being sacred and having mystic qualities, it’s not surprising he should have been controversial. He was really like a diabolical little boy.

I guess you could say I am a Pagan. But Paganism, after all, is nothing but appreciation of nature. It has nothing to do with so-called “black magic”. I am also a member of the Ordo Templi Orientis (the Order of the Temple of the East), a secret society founded in the early 20th century. I don’t like to talk about my own rituals and practices (contrary to popular belief I’m not doing magic circles all the time, although I have done them on occasion), but they have obviously influenced my work. Lucifer Rising was a celebration of the beginning of the Pagan age and the end of Christianity, where Lucifer was elevated from his place in Christian belief as a fallen angel to his pantheistic role as bringer of light… I like to express my beliefs through cinema. After all, movies can be the equivalent of mantras. They cause you to lose track of time and to become disoriented because magical things can happen. Movies can also be evil – although, of course, my definition of evil is not everybody else’s. Evil is being involved in the glamour and charm of material existence, glamour in its old Gaelic sense meaning enchantment with the look of things, rather than the soul of things.” Read the whole article here: http://www.anothermag.com/art-photography/3567/kenneth-anger-on-the-occult

And in case you’re not familiar with Anger Britannica.com states:

“Anglemyer became interested in film at an early age. He claimed that his grandmother was a costume designer for silent films and that he had a small role in Max Reinhardt’s version of A Midsummer Night’s Dream (1935). His grandmother, however, was an interior designer, and some questioned whether he appeared in Reinhardt’s film. He was known later in life as an avid self-mythologizer.

“After graduating from Beverly Hills High School, he directed and starred in his first successful film, Fireworks (1947), shot at his parents’ home while they were away. The brief movie featured Anglemyer as a young man who fantasizes about and is then abused by a group of sailors. (Anglemyer credited himself as Anger and later as Kenneth Anger.) The overt homoerotic content of the film led to obscenity charges against the owner of a Los Angeles theatre that showed it in 1957, though they were ultimately overturned in 1959. Fireworks attracted the attention of sex researcher Alfred Kinsey, whom Anger introduced to the underground gay scene in Los Angeles.

“In 1950 Anger moved to Paris, where he joined the circle of French writers Jean Cocteau and Anaïs Nin and worked for the Cinémathèque Française, the French film archive and screening centre. While in Europe, Anger made La Lune des lapins (filmed 1950 and released 1972; Rabbit’s Moon), which featured a Pierrot figure wandering the woods and pining for the Moon. Inauguration of the Pleasure Dome (1954) was a kaleidoscopic montage of performers, including Nin, in the guise of various deities. Those themes, reflective of Anger’s adherence to the mystical teachings of British occultist Aleister Crowley, would pervade much of his later work. Anger defined himself as a pagan and devotee of Lucifer, though he rejected the notion that he was a Satanist. Because his films were so experimental—almost exclusively without dialogue and rarely more than 30 minutes in length—Anger often found it challenging to fund his projects. He was supported at various points by British American philanthropist J. Paul Getty, Jr., and French fashion designer Agnès B.

“Anger returned to the United States to shoot his hallmark film, Scorpio Rising (1963), a pastiche of homoerotic images of a motorcycle gang in New York City that was set to effervescent pop tunes. It is considered likely the first film to use such music as a score. A theatre manager in Los Angeles who showed the film was convicted of obscenity; the charge was overturned on appeal. Anger followed with Kustom Kar Kommandos (1965), a three-minute movie about car culture in California; the latter two films formed an uneven diptych of fetishized American masculinity.’

Meanwhile, here’s a relatively recent interview with him that ran in the edition of British Esquire: http://www.esquire.co.uk/culture/news/a5483/kenneth-anger/