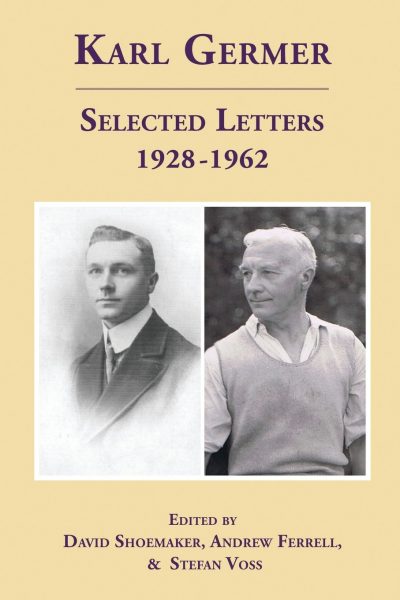 Originally released in December 2016 (see our coverage here), Karl Germer: Selected Letters 1929-1962 has been updated with an eight-page index which significantly aids in finding specific topics in this 400-page volume.

Edited by David Shoemaker, Andrew Ferrell, and Stefan Voss,  Selected Letters contains correspondence both to and from Karl Germer (Aleister Crowley’s successor as Outer Head of Ordo Templi Orientis) drawn from the papers of Phyllis Seckler (Soror Meral). This includes not only Seckler’s letters, but also those of Crowley’s student, silent film actress Jane Wolf. Although Wolfe and Seckler’s correspondence with Germer constitutes the bulk of this volume, we also find occasional letters from other correspondents which made their way into Seckler’s archive, including Jack Parsons, Wilfred Talbot Smith and Marcelo Motta.

This volume represents a “best of” the letters in Seckler’s archive, about a quarter of the available material. While the table of contents lists the page number where each year of correspondence begins, it would have been nice to have the book broken up into chapters by year, or at least have running heads to indicate the year. However, it seems churlish to complain when presented with 400 pages of previously-unpublished correspondence between three important figures in Thelemic history. Especially at such a reasonable price ($24.93 paperback, $9.99 Kindle), the book is a goldmine of primary source material.

The publisher is offering a free PDF of the index to those who purchased the original (non-indexed) edition, or to anyone who just wants to take a gander. In addition, owners of the original edition can, if they wish, get a one-time $10 discount on the purchase of the new edition by sending the publishers a photo of themselves holding the book. To claim your free PDF of the index, or your $10 credit, write to chancellor@totss.org.