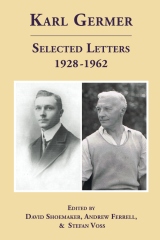 “Karl Germer (1885-1962) was Aleister Crowley’s successor as head of the magical order A.’.A.’. and Outer Head of Ordo Templi Orientis. His legacy, however, is mostly known through the work of his students and confidantes. Little has been published about the life, teachings, and spiritual experiences of this most dedicated Thelemite. In an effort to shed some light upon Germer’s life’s work, the International College of Thelema now makes available this selection from a lifetime of correspondence.

“Selected Letters 1928-1962 includes letters exchanged between Karl Germer and such Thelemic luminaries as Jane Wolfe, Phyllis Seckler, Jack Parsons, Wilfred Talbot Smith, and others. The discussions range from the mundane to the mystical, including the politics and intrigues surrounding Agape Lodge of O.T.O., the publishing of various works of Aleister Crowley, the philosophy of Thelema, and the administration of A.’.A.’.. Scholars, historians, and students of Thelema alike should find much of interest in this collection as it begins to fill a significant gap within the history of Thelema.”