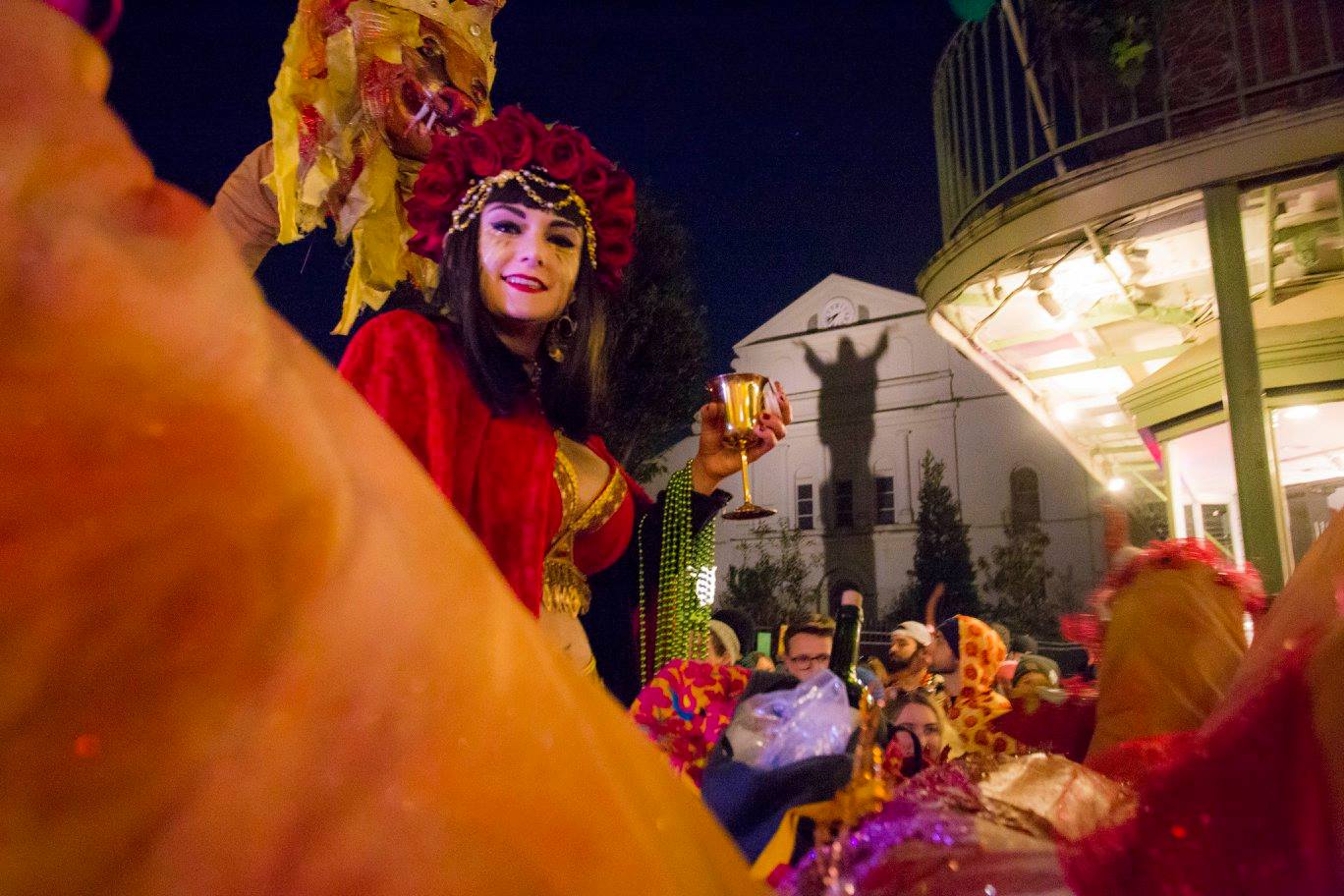 Krewe What Thou Wilt, a project of Alombrados Oasis, is preparing to roll for its third Mardi Gras season in New Orleans’ satirical Krewedelusion parade.

If you would like to march with Krewe What Thou Wilt you must pay annual dues separately to Delusion and to KWTW. Delusion dues are $100, go to http://krewedelusion.org/membership/ to pay. KWTW dues are $25 for initiates and $35 for non-initiates through Jan 5th. You can send KWTW dues via paypal to krewewhatthouwilt@gmail.com. Also be sure to email us your forms, located under the files section of this page–titled “KWTW Membership Package MG 2017”. Please note that dues to Krewedelusion go up from $100 to $200 on January 6th, so be sure to pay ASAP to get the lower price!

“Ancient Romans celebrated the festival of Saturnalia on December 17th. The holiday was marked by a sacrifice at the Temple of Saturn, followed by a public banquet, gift-giving, gambling, and a carnival atmosphere of role-reversal in celebration of the renewal promised by the coming of the new year. According to the Saturnalia by 5th century author Macrobius, it was a festival of light, with an abundant presence of candles symbolic of the quest for knowledge and truth. The Saturnalicius Princeps, elected by lot, ruled as master of ceremonies for the proceedings, issuing absurd commands all revelers were bound to obey. While in later times the ruler was simply a figure of fun, in early Roman celebrations of Saturnalia he enjoyed the office for 30 days, and was then sacrificed. “We are justified in assuming that in an earlier and more barbarous age it was the universal practice in ancient Italy, wherever the worship of Saturn prevailed, to choose a man who played the part and enjoyed all the traditionary privileges of Saturn for a season, and then died, whether by his own or another’s hand, whether by the knife or the fire or on the gallows-tree, in the character of the good god who gave his life for the world.” (Sir James George Frazer, The Golden Bough, 1922, p. 586.)

“In 274 EV emperor Aurelius established the cult of Sol Invictus, sun god of the late Roman Empire. The festival of Dies Natalis Solis Invicti (the Birthday of the Unconquered Sun) was celebrated on December 25, the winter solstice. As Saturnalia’s popularity continued into the 3rd and 4th centuries EV, the two overlapped, resulting in week-long festivities. In the 4th century EV, noting the import of the date to pagan celebrations, the early Christian Church seized on December 25th as the birthday of Jesus Christ, Christmas. Epiphany, also known as the Feast of Lights, marked the visit of the three kings to the infant Jesus, and was observed on January 6th. The twelve days between these dates became known as the twelve days of Christmas. By Medieval times, European Twelfth Night Festivals included a “Lord of Misrule”, and bore great resemblance to Saturnalia in their inclusion of this figure, as well as the emphasis on gift-giving, chaos, and the temporary overturning of social order. Twelfth night grew to include elaborate masked balls, ruled by “kings” chosen by chance. “King Cakes” were baked with a bean or coin in the dough; the lucky man who found the token in his cake was crowned monarch for the evening. As the years passed entertainment continued through Fat Tuesday, as a frenzy of carnal overindulgence preceding the Lenten denial of the pleasures of the flesh.

“European Immigrants eventually carried these traditions with them to New Orleans, where they evolved into the Mardi Gras we celebrate today. In the 18thand early 19th centuries Bals Masques were common and throngs of costumed revelers wandered through the city streets. In 1857, The Mistick Krewe of Comus was established by a group of successful New Orleans businessmen. It is the oldest continuous Mardi Gras organization, and introduced the tradition of torch lit processions and themed floats now synonymous with carnival. Another of the first Krewes, Rex, was organized in part as a spectacle in honor of Russian Grand Duke Alexei Alexandrovich’s visit to New Orleans during the 1872 Carnival season. The Knights of Momus were also established in that year. The parades proved so successful that in 1875 Louisiana declared Mardi Gras a legal State Holiday. Many other Krewes followed, including the Krewe of Proteus, founded in 1882.

“With the exception of a few intermittent years, these four prominent 19thcentury Krewes paraded annually for over a century. Membership was traditionally secretive, and restricted to social, business, and civic elites of European ancestry. This abruptly changed in 1991 when the New Orleans City Council, led by Dorothy Mae Taylor, passed an ordinance requiring social organizations, including Mardi Gras Krewes, to publicly certify that they did not discriminate on the basis of race, religion, gender, disability, or sexual orientation, in order to obtain parade permits or other public licensure. Rex complied, but rather than reveal their members’ identities to the City’s Human Relations Commission, Comus, Momus, and Proteus withdrew from parading. In 1995 two Federal courts ruled that the ordinance was an unconstitutional infringement on First Amendment rights of free association. Proteus later returned to the streets, but Comus and Momus, while continuing their own yearly festivities, have not.

“As Thelemites, we do not reject of stigmatize the flesh, but embrace it as sacred. Our celebration of Mardi Gras hearkens back to Saturnalia’s festival of light; Carnival speaks to our nature as humans, as incarnate biological beings in search of knowledge, truth, and joy. With this in mind, our parade theme can be viewed as a meditation on the death of the Aeon of Osiris and its repressive social constructs. Our beast devours the very Krewes whose existences were rocked by the clash between old and new values.

“We believe the existence of a Thelemic Mardi Gras Krewe that marches yearly to be a highly effective, albeit novel, vehicle for promulgation of Thelema. A parade itself offers a unique opportunity to reach a multitude of people with divergent interests and backgrounds, with a message that is direct and easily understood.”

For more information on Krewe What Thou Wilt, please visit www.krewewhatthouwilt.com.