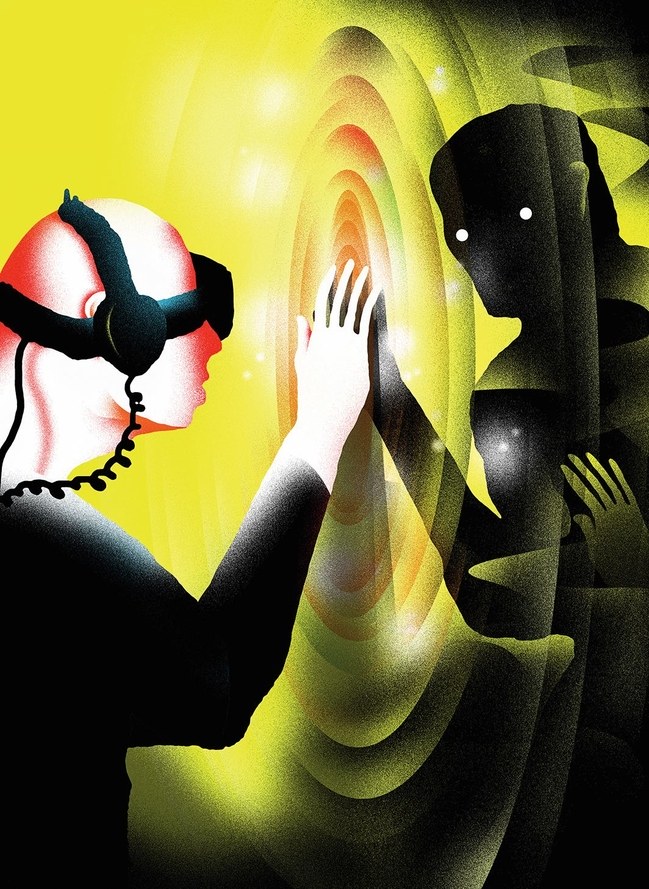 Astral projection and travel is stock-in-trade for many ceremonial magicians, especially those alligned with the 93 Current.  Some would hold that a basic tenet involved is that some aspect of human consciousness can exist independently of the physical body that normally houses it and that the experience of astral travel and other out of body experiences is proof of this tenet. Last month the New Yorker ran a piece questions whether the latter in fact does prove the former or if OBE proves that our whole experience of reality is a projection of internal processes carried out by our brain and extended nervous system. A fascinating proposition — though that begs the question: why? (the same query I’d ask anyone who holds a purely mechanistic view of the manifest universe so infinitely complicated and yet operating in apparently coherent fashion. Here’s an excerpt:

“Having read Johnson-Laird, he’d begun to wonder whether reality, as we experience it, might be a mental stage set—a representation of the world, rather than the world itself. Having an O.B.E. could be like visiting the set at night, when it wasn’t being used. Metzinger started to think about how such a model might be constructed. Some internal mental system must function as an invisible, unconscious set dresser, making an itch feel like an itch, coloring the sky blue and the grass green.

“As Metzinger developed these ideas, he also had fewer out-of-body experiences. Eventually, they ceased altogether; he set the subject aside and became an eminent philosopher of mind. Then, in 2003, he heard from a Swiss neuroscientist named Olaf Blanke, who had learned how to give people out-of-body experiences when they were fully awake. While treating a forty-three-year-old woman with epilepsy, Blanke had applied electrical current to a particular area of her brain, and she had the experience of floating upward and looking down at her own body. Blanke had found many related illusions. Stimulating another location in the brain created the impression of a doppelgänger standing across the room; stimulating a third created the “sense of a presence”—the feeling that someone was hovering nearby, just out of sight. Unsure how to interpret these results, Blanke had searched the literature and come across some papers by Metzinger. They took the idea of mental models to its logical conclusion. It isn’t just that we live inside a model of the external world, Metzinger wrote. We also live inside models of our own bodies, minds, and selves. These “self-models” don’t always reflect reality, and they can be adjusted in illogical ways. They can, for example, portray a self that exists outside of the body—an O.B.E.”