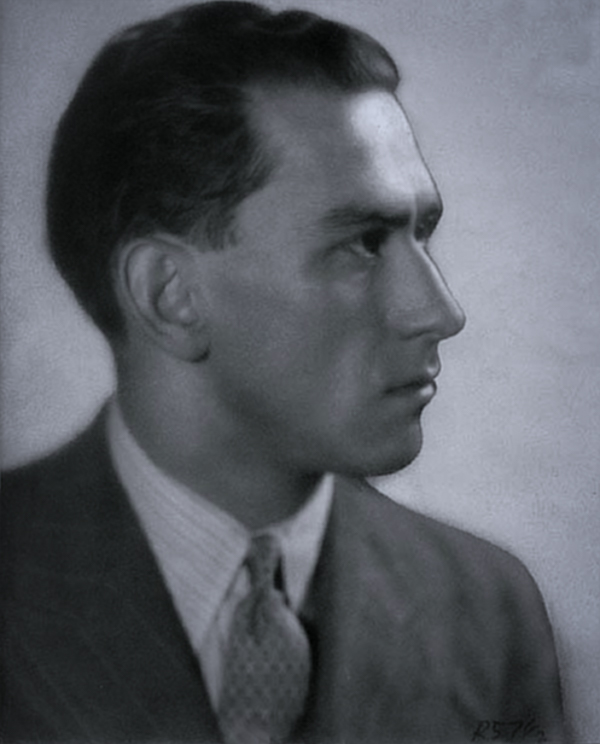 Thirty-six years ago today Francis Israel Regardie (November 17, 1907 – March 10, 1985), shed his earthly vehicle.  So today, in memory of one of our own, I thought I would share this short bio I penned of him some time ago.
Israel Regardie was an occultist, writer, and a personal secretary to Aleister Crowley.  A prolific author, he published multiple works on magick, including The Tree of Life, The Middle Pillar, and the now infamous Crowley biography The Eye in the Triangle. He also released the comprehensive, eponymous work The Golden Dawn—much to the chagrin of members of that Order—bringing to light much of the organization’s secrets and ceremonies, with the goal of preserving them for all time. Regardie’s Probationer Oath for the A∴A∴, circa 1930’s.

Born in London, England to Ukrainian Orthodox Jewish immigrants, Regardie would develop a deep interest in Qabalah, and the Western and Eastern mysteries. Regardie reached out to Crowley after reading Book 4, and by Crowley’s invitation in 1928, went to England to serve as Crowley’s personal secretary.  Though Regardie studied under Crowley and showed immense respect for his work, the two had a falling out in 1932, and there is little evidence to suggest that their relationship was ever reconciled.

A Probationer of the A∴A∴ under Crowley, Regardie went on to take Gerald Suster as his Student.  As one of the last living individuals to have studied directly under Crowley, Regardie’s magical ability and knowledge of occultism was respected and sought after by serious magicians and Thelemites all his life.  Phyllis Seckler, a.k.a. Soror Meral, corresponded with Regardie and sought his advice regarding her own work in A∴A∴.  Though Regardie insisted that he was not qualified to instruct her further, the two became close friends. One of the letters Regardie would write to Phyllis, dated August 16th, 1976.

Regardie was first a member of the Societas Rosicruciana in America, the Golden Dawn successor Stella Matutina.  He then became a member of the A∴A∴ and later, a IX° of the O.T.O..
Regardie, who taught psychiatry at Los Angeles College of Chiropractic, was a proponent of the chiropractic movement and psychoanalysis, and had a special interest in Reichian, Jungian, and Freudian psychology.  Regardie placed a heavy emphasis on the role of psychology in the life of the magician. He went so far as to insist, in his book The Middle Pillar, that a foundation in psychology was necessary for a proper working of magick.  Regardie’s work is now included on the A∴A∴ Student reading list of multiple groups, and his writings are considered indispensable to many modern students of the Golden Dawn system.
Regardie retired from chiropractic and psychiatric work in 1981, moving to Sedona, Arizona where he spent the remainder of his days.  He died of a heart attack on March 10, 1985, at the age of 77.