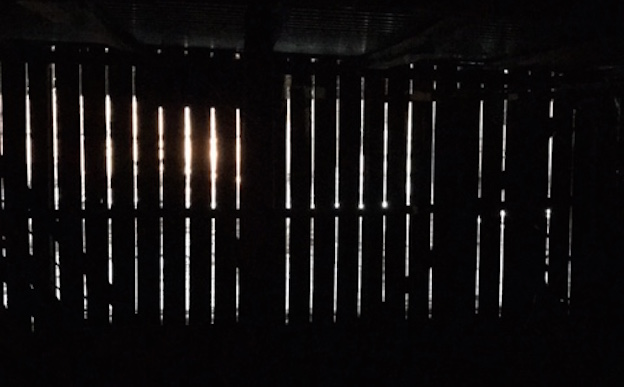 Inspired by verses from the Holy Books of Thelema the first of a series of installations and performances which will culminate into a feature of DARK MOFO 2018 Australia which has fast become Australia’s most exciting and largest attended Art Festival organized around the Winter Solstice.

“Also Adonai spake unto V.V.V.V.V. saying: O my little one, my tender one, my little amorous one, my gazelle, my beautiful, my boy, let us fill up the pillar of the Infinite with an infinite kiss!

So that the stable was shaken and the unstable became still.

They that beheld it cried with a formidable affright: The end of things is come upon us.

And it was even so.”

Brendan Walls is sound artist whose work has expanded in recent years to embrace light, architecture and sculpture. The first work in this series saw the skys above the Huon Valley illuminated with a high intensity ever-shifting series of V shaped light formations upright and adverse in homage to the Secret Master. A vintage Apple Orchard was transformed with sculpture, light and sound and centred around an invocational beacon to the Secret Master. Spaces were bathed in high intensity light, or thrown into darkness. Inbetween these spaces were liminal zones of oscillating light, strobes, and dream-machines. The sound was mixed live by Walls from materials recorded in Mexico, Italy and Australia.

Each performance went from dusk to midnight. “The cone is cut with an infinite ray; the curve of hyperbolic life springs into being.” Brendan Walls is an interdisciplinary artist, designer, composer and performer. Utilising a variety of handmade instruments and sound producing sculptural objects, his work explores the psycho-acoustic properties of performance spaces, physical and technological limitations, failing systems and collapse. With a career spanning more than 20 years Walls has performed extensively in Australia and Overseas. He has released over 20 albums, both solo and in collaboration. In 2002 Walls’ first solo release Cassia Fistula, commissioned by Idea Records, U.S.A was featured in Artforum and Wire Magazines. He has been included in international symposiums, publications and Biennales concerning experimental and improvisational practice and debate. His work was showcased in 21:100:100 – One Hundred Sound Works by One Hundred Artists from the 21st Century (Gertrude Contemporary, Melbourne).

Alongside this formidable sound practice, Walls has produced a large body of installation work, the most recent, Elements of Refusal, employed a series of long, tuned wires which were played and operated by the use of light sensors as well as data from soil samples utilising arduino technology. The work was included in the 2015 MONA FOMA Festival.

In conjunction with his art practise he has also worked extensively in broadcasting, producing the internationally lauded, ground-breaking experimental art/music series ‘Subsonics’ for SBS TV and ‘SET’ for the ABC.

In 2013, Walls relocated his studio and practice to rural Tasmania. He is currently developing new works set to premiere at Dark Mofo in 2017 and 2018. =