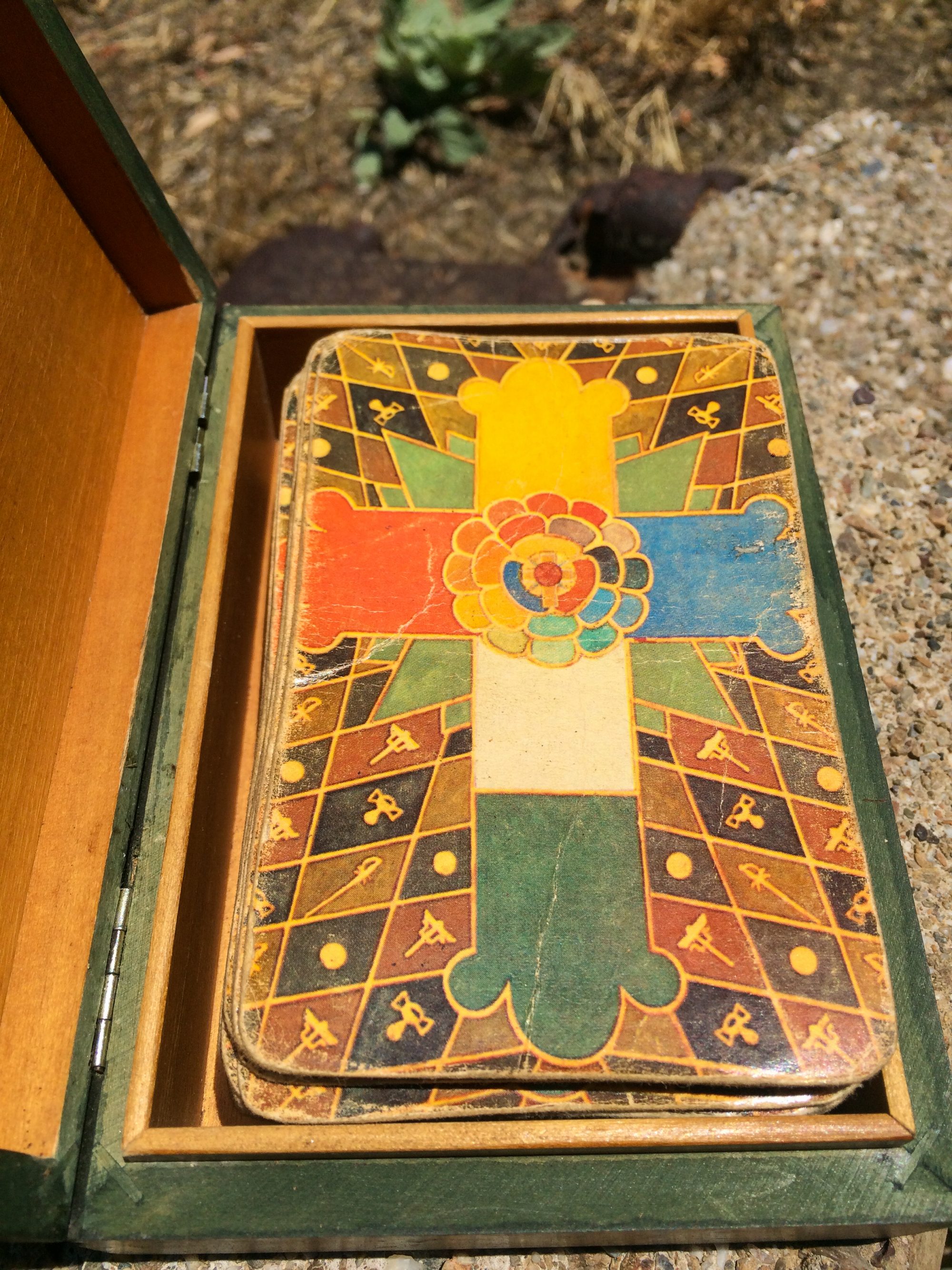 The images above and below are of Grady McMurtry’s personal Thoth deck – one of the early Llewellyn editions.  Grady would be directly involved with the production of this deck which was first published in 1969.  This was the first time I had seen a deck wherein the borders had been removed, and the images were striking.  This practice has become more common today as many now prefer to personalize their decks.  Grady’s cards were well worn and the images somehow seemed more alive.  There was a presence about Grady’s deck which inspired me and for this reason I have chosen to personalize my own deck in a similar fashion. (More details on that later!) The Fool – from Grady’s deck

Seeing Grady’s cards and holding them for the first time led me to wonder how he himself may have read them.  That is, what layout did Grady use?  I knew there were examples of Grady’s readings in the archives but had not, until that time, considered trying to reverse engineer his notes to extrapolate his method, or even if it could be done.
There were a few people I could talk to that witnessed Grady reading.  But, none were able to recall specific details.  However, it was clear that all believed Grady to be a uniquely gifted reader.  I also learned that he had affinity not only with the Thoth deck but also to Manly P. Hall’s (also known as the Knapp-Hall deck published in 1929).  None of the witnesses could identify the layout he used, only that it was unusual.
Luckily all the right pieces fell together and I found various samples of Grady’s readings in the archives, including a few in his own hand.  From these sources I was indeed able to reconstruct Grady’s method.  However, I should point out that this would not have been possible if not for the records of Frater Zardoz (A.K.A. Christopher Dietler).  Thankfully Frater Zardoz recorded a few of Grady’s readings in detail in his own records which he later passed onto me.  One particular reading occurred when Grady was visiting the Sacramento area in the early 80’s.  The reading was meant to serve as an omen for the local community, Boleskine House, which had just been officially chartered.  Zardoz took the opportunity to ask Grady details about how he did his readings.  This he did again on the following day.  The notes taken on those two days were the final pieces of the puzzle.  Had Zardoz not had the foresight to see the value in recording these details we would not have been able to reconstruct Grady’s unique method. An example of a reading from Grady’s personal papers, dated to August 2, 1980 e.v.

Here is what we know: Grady used a variant of the Celtic Cross with complementary cards added across the layout.  In this way he would have a clearer picture of the forces at play as it results in a two-fold expression in each position.  He utilized an 18 card spread, in which nine of the cards were always thrown in the exact order and the other nine varied.  That is, the first card was always placed in the center and the last eight always formed the columns from bottom to top, but the nine cards complementing the central card Grady placed by intuition, guided by the hand of his Angel.

However, as is common, the manner in which Grady interpreted the positions would not change.  The illustration above guides you through three examples of readings located in the archives.  The colors of Black, Red and Blue each signify a separate reading.  Just shuffle your deck and follow the colors and sequence until all the cards have been placed.  Once you have done this a couple of times you will easily be able to replicate what Grady did.
The following notes illustrate how he interpreted each position once the cards were in place.
(Following the black sequence)
1) Current situation – Base, signifier
2) Counter force – Opposition
3) Possible future A – (Goal/Aim)
4) Possible future B – (Goal/Aim)
5) Past – Cause
6) Past – Cause (complement)
7) Future influences
8) Future influences (complement)
9) Present attitude
10) Present attitude (complement)
11) Self – Interior motive
12) Self – Interior motive (complement)
13) House/Resources
14) House/Resources (complement)
15) Hopes & fears – Expectations
16) Hopes & fears – Expectations (complement)
17) Future – Result
18) Future – Result (complement) Grady offering readings at Ren Faire in September of 1978 with his wife Shirin to his right.