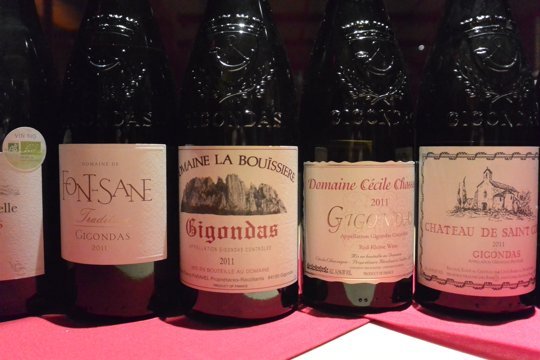 The Rhone valley produces many great wines such as Hermitage and Chateauneuf du Pape.  It also produces great value wines such as Cotes du Rhone.  Straddling both categories are some very good wines at reasonable prices including wines from the region of Gigondas (pronounced “zhi-gon-dahs”).  Often referred to as the poor man’s Chateauneuf du Pape, these wines are very similar to the style of wines of Chateauneuf albeit slightly lesser in quality.  The quality on many Gigondas wines has, however, greatly increased over the last decade.

The village of Gigondas, in the Rhone River valley, is in the Dentelles de Montmirail Mountains.  The village traces its roots back to the Romans.  Its original name was Jocunditas meaning great pleasure in Latin as the town was founded as a place of respite for the Roman Legion.  There is no doubt that wine has been produced there since Roman times.  In due course the vineyards outside of the town were ceded to the Church.  Later the vineyards became a part of the Principality of Orange under the control of the Rhénane de Nassau family.

Eventually the area was annexed by Louis XIV.  Records mention a white wine being made there in 1594.  Interestingly, no white wine is made in the area today.  In 1894, wine from this region won a gold medal at an agricultural fair in Paris.  Like many Rhone wines, in the later part of the 1800’s and the first part of the 1900’s, the wines from Gigondas were often used to enhance Burgundies.  The Gigondas wines added color and body, especially in weak Burgundy vintages.   In the early 1950’s the area was granted Cotes du Rhone Villages status by the Appellation d’Originie Controlèe (AOC).  In 1971 Gigondas was given its own AOC designation.

AOC rules dictate that the vineyards must be a mixture of the same grapes from which Cotes du Rhone are made.  It is important to note that this is not a requirement on which grapes are utilized in any particular bottling. A maximum of 80% of a vineyard may be Grenache with a minimum of 15% each of Syrah and Mourvedre required.  In addition, with the exception of Carignan (which is prohibited), a maximum of 10% of all other southern Rhone permitted grape varieties may be grown.  Traditionally wines were fermented in cement tanks, but these days, many wineries have switched to oak barrels.  Gigondas produces about 5.5 million bottles each vintage.  While most of the wine produced is red, there is also a bit or Rosè made (which also must be 80% Grenache).

The soil in Gigondas is mostly limestone and clay.  Many of the vineyards are dug out on steep terraces cut into the mountain sides.  The vineyards are as high as 600 meters.  Between the higher altitude and the ever present Mistral winds (which blow down the Rhone valley), Gigondas is a cooler microclimate than its nearby neighbor Chateauneuf.  In fact, harvest is usually a couple of weeks later as the grapes take a bit longer to ripen.

The finished wines still provide a similar experience to Chateauneuf’s at an often, less expensive price.  Gigondas wines are more rustic and powerful.  Elegance is not a term usually associated with these wines.  The Grenache grape produces wines that are higher in alcohol than most grapes and offer cherry, raspberry and plum flavors.  Syrah and Mourvedre in the mix provide some meaty and spice notes.  Many of them have a black licorice quality as well.  The best Gigondas wines will cellar well for ten years or more, however most should be drunk earlier.  For my tastes, they are at their best about 3 to 5 years from vintage after giving the wines a few years to round out and soften in the bottle.
For my tastes there are two producers whose wines are not only the best Gigondas, but rival most Chateauneuf wines as well.  Domaine Santa Duc was constructed in 1884.  Their basic Gigondas Tradition has 75% Grenache, 10% Syrah, 10% Mourvedre, and 5% Cinsault and sees 14 months of oak.  It sells for around $40 (the price has risen in recent years) and is an excellent wine that really needs a few years in the cellar.  Santa Duc also makes a Prestige de Hautes Garrigues which costs about $15 more.  It is a blend of 80% old vine Grenache, 15% Mourvedre, 3% Syrah and 2% Cinsault.  The wine sees two years in oak.  This may be the best wine produced in this appellation.  At $55, it is not cheap, but is a truly great wine.

The other top producer is Chateau de St. Cosme.  The estate is on a site that was most likely used for growing grapes back in the Roman era.  It has been a wine estate since at least 1416 as attested by a document mentioning the granting by Jean de Chalon, Prince of Orange, of “land for the planting of vines on the Saint Cosme slopes.” The Barruol’s (the present day owners) ancestors acquired it in 1570, and at the end of the sixteenth century built a residence over the existing cellars.  St. Cosme makes five Gigondas wines.  The Hominis Fides and the Le Claux are 100% Grenache.  The vines are quite old; believed to be over one hundred years in age.  The La Poste is a proprietary blend of grapes.  Only two barrels are produced in a vintage.  The Valbelle is 90% Grenache and 10% Syrah and blended from the estates oldest vines.  All four of these wines see time in oak and are available for around $60.  Any of these four wines is as good as it gets in Gigondas and is absolutely as good as 99% of the wines from Chateuneuf.  They also make a regular Gigondas which is 67% Grenache, 20% Syrah, 12% Mourvedre and 1% Cinsault.  At a cost of about $35, this is an excellent wine.  All of these wines need some time in the cellar and are capable of aging for fifteen years.

There are several other producers whose Gigondas I like as well.  They include Les Haut Montmirail, Domaine Raspail (Ay), Montirius, Tardieu-Laurent, Domaine Grapillion D’Or, Domaine Les Paillieres.  One final producer I would like to recommend is Domaine de Cayron.  Their Gigondas is very traditional.  Usually around 70% Grenache and 15% each of Syrah and Mourvèdre.  These wines really need a good five years in the cellar to strut their stuff.  They are earthy and mineral driven wines that can age easily for fifteen years.

When pairing food with a Gigondas, I would opt for dishes as robust and rustic as the wine.  A menu including beef stroganoff, stews or even spare ribs would work well.  These wine match well with hard cheeses as well.

The next time you feel like buying a Chateauneuf du Pape, don’t be afraid to look 20 miles to the northeast and try a Gigondas.  You will end up with a very nice wine at less cost.  I hope you will all go out and try one and please, let me know what you think.