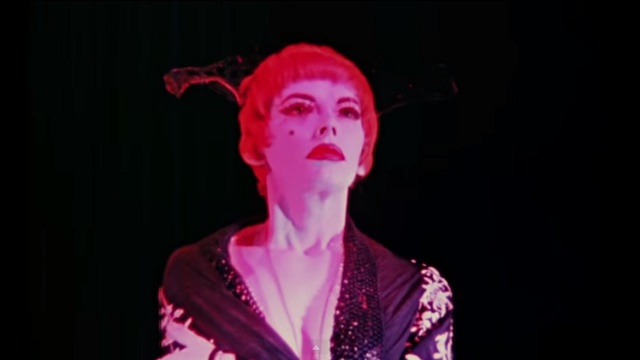 The Museum of Contemporary Art in Los Angeles’ YouTube channel features footage of artist/magician Marjorie Cameron Parsons Kimmel reading her poetry in 1989, part of the the last look at her work mounted before her passing 6 years later.

“Prior to Cameron: Songs For The Witch Woman, October 11, 2014–January 18, 2015 at MOCA Pacific Design Center, the largest survey of Marjorie Cameron’s artwork was The Pearl of Reprisal, a retrospective at the Los Angeles Municipal Art Gallery in 1989. The exhibition spanned thirty years, from the notorious Untitled “Peyote Vision” (1955) to Pluto Transiting the Twelfth House (1978-1986), pen and ink drawings that lent insight to the artist’s psychic state at the time.

“Before the opening reception, Hedy Sontag introduced a program titled An Evening With Cameron: The Pearl of Reprisal. Sontag screened two films that feature Cameron: Kenneth Anger’s Inauguration of the Pleasure Dome (1954) and Curtis Harrington’s lyrical documentary The Wormwood Star (1955). After the screening, Cameron emerged barefoot to give a dramatic reading of her poetry by candlelight. Pleasure Dome cast members Samson De Brier and Paul Mathison were among those in attendance.

“The reading, which was art directed by Sontag, evokes Cameron in her Topanga Canyon studio, deep in thought as she detaches from the lived world and navigates the subconscious. A prolific writer who shared her work with friends, Cameron was private when inspiration struck. She was known to write in her notebook in social settings, fervently and silently; she forbade visitors to her studio, a sanctum where art-making and writing mingled with astrology and occult ritual.

“Though the dates of these journal entries and poems are not known, in their language of mourning and invocation, and use of sacred and Romantic imagery, they are of a piece with the notebooks Cameron kept after the death of Jack Parsons in 1952, as well as the verses she recites in The Wormwood Star, which describe the birth of a spiritual child born of psychic union with Parsons. Notably, Cameron reads prose from Anatomy of Madness (1956) [5:39], a mixed-media folio included in the exhibition and on view at MOCA. Later published in Wallace Berman’s Semina, the text recounts a life cycle of death, rebirth, metamorphosis, and finally, a transcendent spiritual breakthrough.

“This never before seen footage, courtesy of the Cameron Parsons Foundation, is a rare document of an artist whose practice had delved further inward, away from the public eye. Due to the quality of the recording, this video has been subtitled. Every effort has been made by MOCA and the Cameron Parsons Foundation to ensure accuracy of the transcription. Please note that the original footage was edited in camera and portions of the reading were omitted by the cameraperson.”