Pioneer Works at Red Hook Labs is presenting a major exhibition on the collaborative works of Genesis and Lady Jaye Breyer P-Orridge through July 10 at 135 Imlay Street in Brooklyn. The posted description says:

BREYER P-ORRIDGE: We Are But One is the first major posthumous presentation within the United States of musician, writer, occultist, cultural engineer, and visual artist Genesis Breyer P-Orridge (1950-2020) and he/r romantic partner Lady Jaye Breyer P-Orridge (1969-2007). On view at Pioneer Works at Red Hook Labs, the exhibition offers an intimate look at the artists’ Pandrogyne project, a nearly two-decade endeavor to liberate love and pure consciousness from the confines of a gender conforming body.

Influenced by the cut-up technique of Brion Gysin, the duo officially initiated the project on Valentine’s Day in 2003, undergoing their first plastic surgery together in an effort to transition to their “angelic bodies”—a single ‘pandrogynous’ being named BREYER P-ORRIDGE. The concept was twofold: first, plastic surgery represented a symbolic act of defiance against one’s DNA, and a rupture to the limitations imposed by biology; second, Pandrogyne was the physical manifestation of loving someone so deeply that you wanted to become that person. Throughout he/r practice, Genesis blended pronouns and used performance, collage, body modification, photography and contemporary magical tropes to disrupt longstanding preconceptions of psychology, sexuality and spirituality.

Curated by the artist’s longtime gallerist and friend Benjamin Tischer, the exhibition provides a rare glimpse into BREYER P-ORRIDGE’s ambitious vision for the project, which disrupted the status quo and defied all gender norms. As visitors enter, they encounter a new, shrine-like sculptural installation created by Genesis’s daughter Genesse P-Orridge and Pioneer Works. “My intention with this Shrine is to create a space for reverence and reflection centered around the inspirational life my father led,” she says. “The Shrine will incorporate relics and sacred items from my father’s personal altar which s/he collected from he/r travels to spiritually vibrant areas like Benin and Nepal, as well as leftover materials from he/r own sculpture creations, and gold leaf—a favored material in he/r practice, which we often used when collaborating on art pieces while I was growing up.”

The dome-shaped installation takes inspiration from the Buddhist stupas that Genesse and Genesis visited during their formative travels in the Himalayan region. Four window-like openings reveal one of BREYER P-ORRIDGE’s Pandrogyne artworks inside. Atop the structure is a tower with 23—instead of the traditional 13—tiers, in alignment with Genesis’s lifelong fascination with the number, inspired by he/r mentors Gysin and William S. Burroughs.

Adjacent to this installation is a newly unearthed and edited video titled Thee Whispering Began, a collaboration conceived and executed with digital artist Sam Zimmerman in 2003. The video gave birth to a body of free-form, spontaneous drawings, in which words are blended together in exploration of Pandrogeny. Also on view are a wide-ranging selection of archival footage, videos—by BREYER P-ORRIDGE as well as Nicolas Jenkins, Marie Losier, and Scott Treleaven—sculptures and works on paper, to provide further context to the artists’ infamous projects: for instance, Polaroids documenting surgical modifications, and mixed media collages that demonstrate their deviance from sexual convention.

Tischer first met Genesis as a producer of the documentary film Cut-Up Concert, and was subsequently hired to organize an extensive archive which was acquired by the Tate Modern. His former gallery, INVISIBLE-EXPORTS, championed the artist’s practice over the past 14 years. Of the impetus behind this exhibition, he notes, “While sick, Genesis talked of wanting a show that focused just on her Pandrogyne project with Lady Jaye. S/he, correctly in my opinion, thought that people were just now catching up with what they were trying to do and its importance.”

The exhibition is presented in tandem with a series of concerts and related programs organized in partnership with Ryan Martin of Dais Records, an independent label that released numerous records with Genesis in he/r lifetime. Programming will include a film screening, selected by Jacqueline Castel (A Message From The Temple), and performances by Ov Stars (a Psychic TV tribute set featuring past members), Dreamcrusher, Hiro Kone, James Hoff, and more special guests to be announced.

We Are But One follows a long history of engagement between Genesis and Pioneer Works. An early Advisory Board member of the organization, s/he taught an eight-part class on art as a manifestation of spiritual quest and shared perception in 2015–the same year that Psychic TV performed; in 2018, the artist participated in Dream Machine, a live reimagining of Bryon Gysin and William Burroughs’s experiential invention. Taken as a whole, the exhibition and its related programming pay tribute to BREYER P-ORRIDGE’s lasting influence, following Lady Jaye and Genesis’s deaths in, respectively, 2007 and 2020. 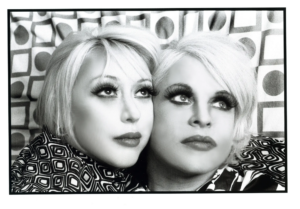