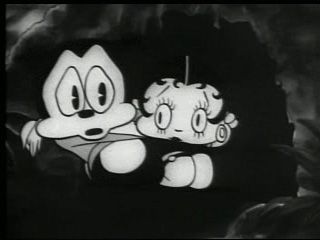 “Bimbo’s Initiation is a 1931 Fleischer Studios Talkartoon animated short film starring Bimbo and featuring Betty Boop. It was the final Betty Boop cartoon to be animated by the character’s co-creator, Grim Natwick.

“Bimbo is walking down the street when he suddenly disappears down an open manhole. He lands in an underground clubhouse of a secret society. The leader asks Bimbo if he’d like to be a member, but Bimbo refuses and is sent through a series of dangerous events. He is repeatedly asked by the leader to join their society, but keeps refusing. Bimbo is brought through a series of mysterious doors that lead him into yet another sub-basement. Bimbo flees through various death traps before landing in front of the mysterious order’s leader again. Bimbo still refuses to become a member, but finally accepts the invitation when the leader reveals to be the real Betty Boop and the rest of the society members remove their costumes, showing that they are all Betty clones and Bimbo dances with all the Betties to celebrate.

“The song Wanna Be A Member? is parody lyrics written to the 1919 song The Vamp (or Vamp A Little Lady).

“The surreal, nightmarish atmosphere of Bimbo’s Initiation has made it one of the most renowned Fleischer Studios shorts. Leonard Maltin described it as “the ‘darkest’ of all”[1] the Fleischers’ cartoons. In 1994 it was voted #37 of the 50 Greatest Cartoons of all time by members of the animation industry.” sez Wikipedia