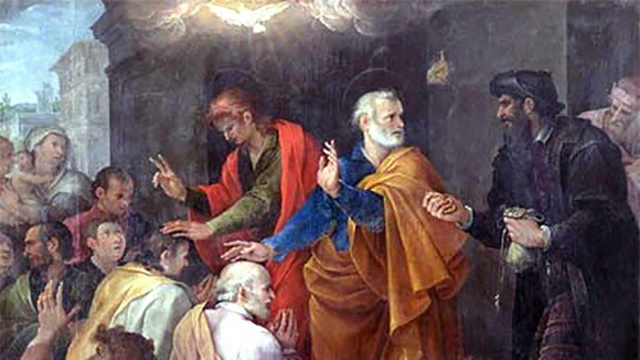 Tomorrow, June 29, is the Feast of St. Simon Magus, who lived around 35 e.v. In Christian lore, he’s  known as the magician who offered to pay the offered the disciples money for the power of the Holy Spirit (Acts 8:9-24). According to The Invisible Basilica:

Samaritan founder of the Simonian sect of Gnostics, contemporary of the Apostles and of Philo Judaeus of Alexandria. Little is known of Simon or the Simonians, most of the information we have about him is from his enemies, and is probably highly distorted. They described him variously as a Christian, a Jew, a pagan and the founder of a new religion; a magician, a sorcerer, a religious philosopher and an arch-heretic; a pseudo-apostle, a pseudo-Messiah and a pretended incarnation of God; and the “father of all heresies.” Some of the early anti-Gnostic writers label Simon as the first of the Gnostics. This may be true; however, many modern scholars believe that Gnosticism significantly predates Simon, and there is even some disagreement over whether Simon can truly be considered a “Gnostic.” He may have been a pre-Christian religious teacher of a syncretized Judeo-Hellenic system, like Philo, who later engaged in a partial conversion to Christianity; he may have been influenced by Persian, Egyptian, Orphic and/or Pythagorean sources; but his precise identity and teachings remain unclear. There is some speculation that the various accounts of Simon Magus actually refer to two or more different individuals.

In honor of St. Simon Magus, here is a recipe from his region of the world. Would you like to learn more about Simon Magus?