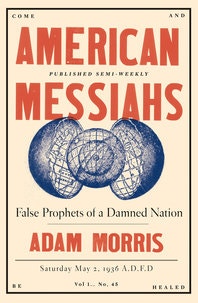 This past Spring, the New York Times Book Review published a review of American Messiahs: False Prophets of a Damned Nation. The book looks at alternative religions that have arisen in the U.S. since the late 18th century through to the 20th century. It apparently boils down the main operating tenets of most of these to: leaders demanding total obedience, followers leaving their family and communities (Liber Cheth anyone?) to join the flocks of such leaders and control exerted over follower’s sex lives. Interestingly, the membership of many of these religions were predominantly female, though most of the leaders (but not all) were male. Most of these faiths revolved around a doctrinal core referred to as New Thought which does contain some parts that might ring a bell with Thelemites:

“Other scholars have traced this mishmash of mind cures, millennialism, mesmerism, spiritualism, theosophy and other strains of pseudoscience and mysticism. The central idea of New Thought spirituality is that all humans possess a divine essence. God, or Spirit, is everywhere, and once we learn its secrets, we can manipulate reality with our minds. Faith is not a gift or a comfort, but a superpower.”

“’Dr’ Teed dabbled in alchemy, astrology and electrotherapy. He advocated celibacy in order to redirect sexual energy to the brain, which would in turn cause ‘combustion’ in the pineal gland. ‘The explosion would cause the production of gametes to cease entirely, allowing the body to regenerate to the bisexual completion of pre-Adamic man,’ Morris explains.

When Teed himself transformed into a bigendered deity — which would happen soon, he promised — he would destroy the cruel capitalist system and inaugurate a ‘New Order of celibate socialism.’”