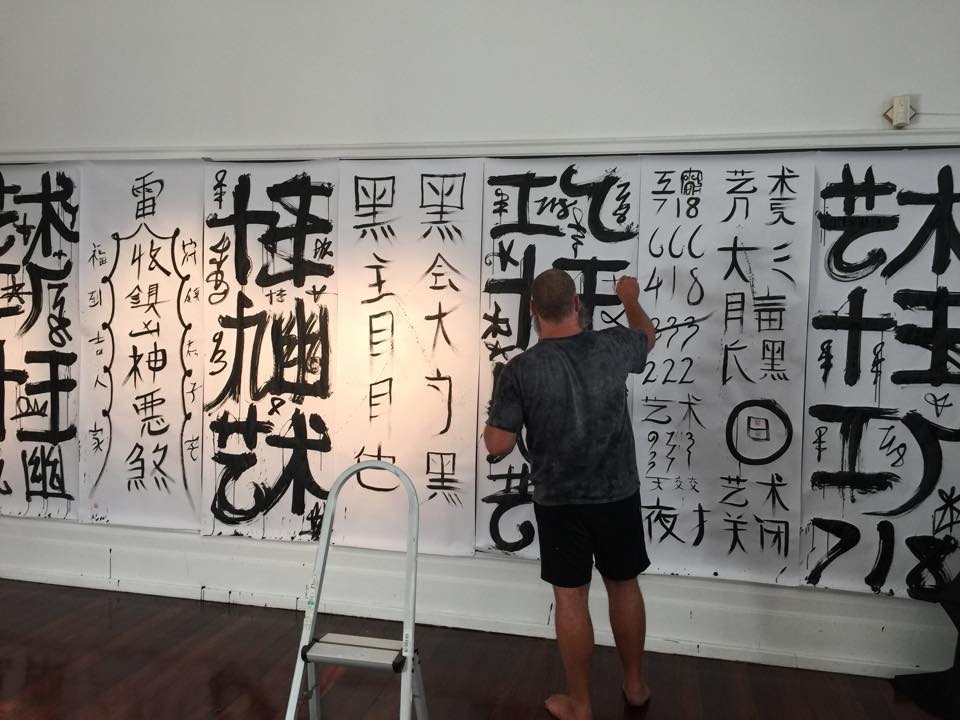 Mao-Shan 茅山 草人/ 纸人 术
pen, ink and acrylic on paper
40 x 30cm
FACTORY 718
Opening 6.30pm Friday 5th December
______________________________________
Mao-Shan Straw Effigies
茅山 草人/ 纸人 术
There are 2 types of Effigies used in Taoist Sorcery, either made with straws or made with Papers. Traditionally, straws are used to create Effigies. Papers Effigies are often used because creating effigies out of papers are easy and papers are easily available. Straw / Paper Effigies in Taoist Sorcery are used for different purposes. The popular usage of Straw / Paper Effigies in Taoist Sorcery /Magic are:
1) Seek Revenge / Getting Even – To cause harm on a Victim
When a Taoist Sorcerer wants to control a person like a puppet or to torture him/her from a distance, he will use the victim’s Real Name, Date Of Birth and Photo and then go through a ritual to capture one of his HUN(s)(魂) and one of his PO(s)(魄) and attached them to the Straw / Paper Effigy (Taoist Hexing Doll). Hair, nails or any belongings of the victim are sometimes also attached to the Hexing Doll if they are available. In some cases, needles are also poked onto the Hexing Effigy。 Taoist Hexing Doll is equivalent to the Voodoo Dolls of Africa.
2) Absorb Bad Luck/ Black Magic/ Psychic attacks (草人替身 / 纸人替身)
Straw / Paper Effigy is created as a Substitute(替身) of a person with his Eight Characters(八字) written on the Effigy and talismans are attached to it and go through a ritual to activate the Effigy. The effigy, instead of the actual person, will absorb all the Bad Luck / Black magic / Psychic Attack and later get rid of it by throwing into the river / sea or burnt it away. This is equivalent to Hoon Pak Yong (HPY) of Thai Magic.
3) Bonding or Separating a Couple / Husband-Wife
2 Straw / Paper Effigies are created with one representing as a male – Boyfriend / Husband and another one as a female – Girlfriend / Wife. Both sides of Eight Characters(八字) are needed to be written on each male and female effigy, and talismans are attached to the effigies, and go through a ritual to either Bond the Couple / Husband-Wife or separate them for good.