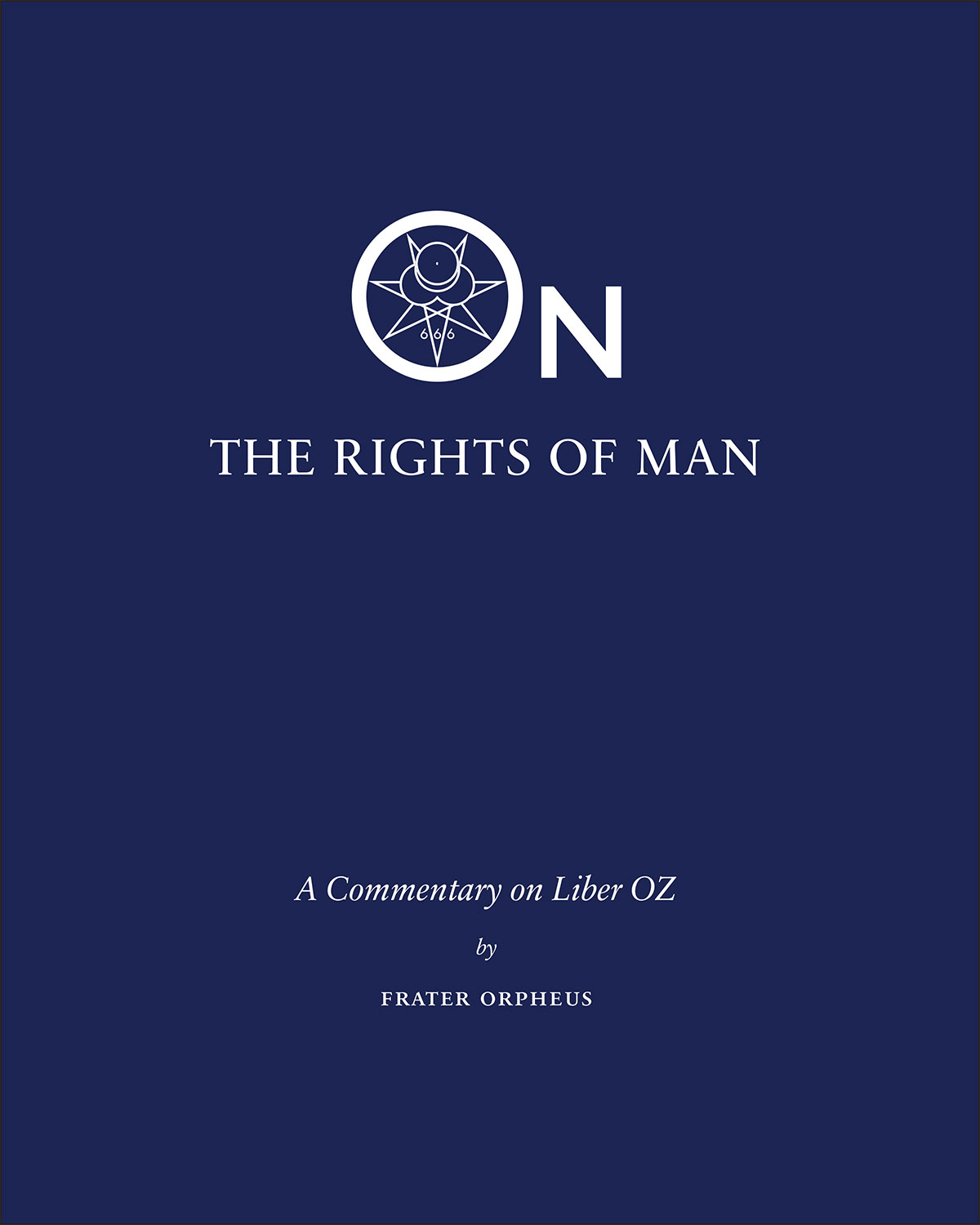 Today I am publishing Dr. Richard Kaczynski’s forward to my book “On the Rights of Man”, an overview of Liber OZ.  I was of course honored that he would contribute the forward and as one would expect his thoughts are insightful and capture the very essence of why I felt it was important that we as a community discuss Liber OZ.

For the record, there are only about thirty copies left of the hardback and you can only get them through Black Sun’s store here — https://black-sun-lodge-store.square.site/

Here is a video Dr. Richard Kaczynski presenting on “Oz Origins” at Liber Oz Fest on August 11, 2018 e.v. this was prior to my book being published but I had shared my notes with Kaczynski which he kindly mentions in his lecture. See here — https://www.youtube.com/watch?v=XwXedPAmpS8

Not the film, as Aleister Crowley bemoaned to W. B. Crow: “You are quite wrong in thinking that The Wizard of Oz has anything to do with me.  That was the title of a film which I did not see, but I could not change the title of my book […] because Hollywood chose to pinch the word.”  No, OZ the document. OZ, the declaration of universal human rights.  OZ, the liber.

All but five of its words are just one syllable in length.  Intentionally short and succinct, it may be the most reproduced of Crowley’s works: distributed as postcards, reprinted in books and magazines, and emblazoned on t-shirts.  It was included in The Weiser Concise Guide to Aleister Crowley because, let’s face it: Liber OZ is Crowley at his most succinct.  Most clear.  And most debated.

Each word has gone under the rhetorical microscope, from late-night lodge discussions, to countless online forums, to weekend seminars in hotels and decommissioned churches.  What is a “right”? Can rights be exercised without consequences? Does the term “man” include women? What does “as he will” mean? Does the right of others to move freely on the face of the earth include my living room? Are “slaves” followers of what Crowley dubbed slave religions, or are they who Liber AL calls slaves of the beauteous one?

No wonder Liber OZ Fest—yes, this is a thing that exists, and I had the pleasure of speaking there in October 2018—managed to fill two days celebrating all things Liber OZ.  If there was any doubt how many words have been devoted, how much ink has been spilled, on this subject alone, the length of this book will dispel them.

Digging into this short and deceptively simple document unfurls the full panoply of Thelemic philosophy: the law for the New Aeon.  It also shines a light on how much remains to be done today to safeguard basic human rights.

We have the right to speak and write as we will.  Yet social media struggles with hate speech, fake news, alternative facts, Russian bots, and corporate disinformation. The free press is under attack, from repressive governments to literal acts of violence; from Jamal Kashoggi to Charlie Hebdo.  Entire nations censor the Internet, or block social media altogether.

Despite the right to love who we will (and make no mistake, Crowley was bisexual), debates still rage about marriage equality.  lgbtq+ people around the world continue to be harassed, assaulted, imprisoned, and even executed.  Interracial relationships are still frowned upon, if not outlawed, in many places, amidst a disturbing resurgence in racism and white supremacy.  Caste and class continue to constrain relationships.

We have a right to move as we will on the face of the earth, yet refugee crises around the globe are met with a rising tide of nationalism and xenophobia. While we have a right to eat as we will, starvation wages, hunger, and poverty afflict people everywhere, from developed nations to the third world. The right to die as we will is debated in legislation on assisted suicide as well as religious conscience exemptions.

Meanwhile, issues such as capital punishment and the right to life are argued in American courts.  The right to kill (or defend ourselves from) those who would thwart these rights is an animating belief in pro-gun groups.

Welcome to the wonderful world of OZ.