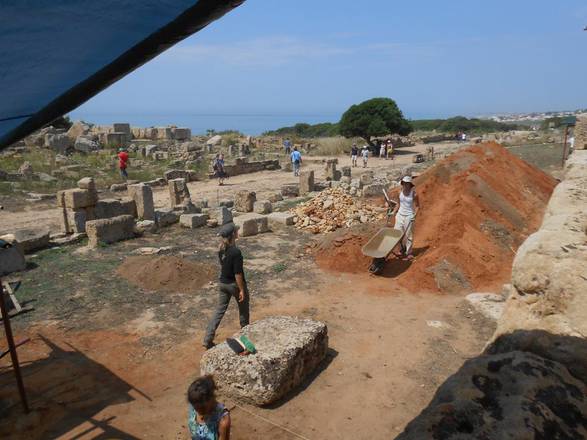 Here’s a report from ANSA Med on new archaeological finds in Sicily including materials associated with a Goddess temple:

“Students and archaeologists from New York University (NYU) and the University of Milan (UniMi) brought to light new evidence of ancient life with four discoveries at Temple R in Selinunte.

“The mission led by professors Clemente Marconi, Rosalia Pumo and Andrew Ward brought the discovery of part of a monumental platform on two levels that was likely used to house the main altar of Temple R, the oldest in the city, dated archaeologically to 570 BC.

“It is a historical testimony of two different phases of the city: the lower platform dates to the years of construction of Temple R; while the higher platform, more monumental, dates to the 5th century.

“This is the same area where, in 2010, researchers with the NYU-UniMi mission found abundant remains of animal sacrifice.

“Among the finds were also two spearheads that were found burnt and crossed. “A truly exceptional case in the Greek world to find them like this,” said professor Marconi.

“‘It was typical of female cults to have dedications of weapons, and the finding in front of Temple R, dedicated to a goddess, is certainly not accidental,’ he said.
During the excavation, a large goat’s horn was also unearthed, evidence of a prestigious sacrifice to the divinity.”