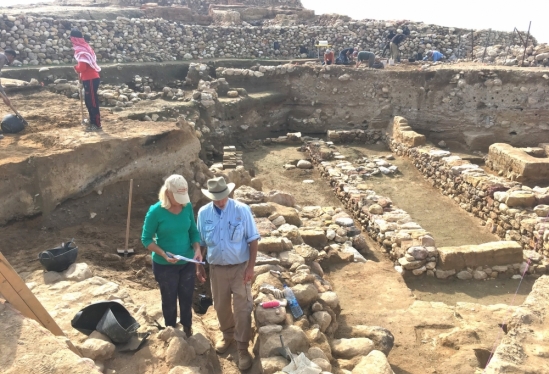 The scholarly journal Nature recently published a report on archaeological excavations and analysis at the ancient Middle Eastern site of Tall el-Hamman indicating that may have was destroyed by a cosmic airburst – this being the inspiration for the Biblical account of the destruction of Sodom and Gommorah. The report’s abstract states:

“We present evidence that in ~ 1650 BCE (~ 3600 years ago), a cosmic airburst destroyed Tall el-Hammam, a Middle-Bronze-Age city in the southern Jordan Valley northeast of the Dead Sea. The proposed airburst was larger than the 1908 explosion over Tunguska, Russia, where a ~ 50-m-wide bolide detonated with ~ 1000× more energy than the Hiroshima atomic bomb. A city-wide ~ 1.5-m-thick carbon-and-ash-rich destruction layer contains peak concentrations of shocked quartz (~ 5–10 GPa); melted pottery and mudbricks; diamond-like carbon; soot; Fe- and Si-rich spherules; CaCO3 spherules from melted plaster; and melted platinum, iridium, nickel, gold, silver, zircon, chromite, and quartz. Heating experiments indicate temperatures exceeded 2000 °C. Amid city-side devastation, the airburst demolished 12+ m of the 4-to-5-story palace complex and the massive 4-m-thick mudbrick rampart, while causing extreme disarticulation and skeletal fragmentation in nearby humans. An airburst-related influx of salt (~ 4 wt.%) produced hypersalinity, inhibited agriculture, and caused a ~ 300–600-year-long abandonment of ~ 120 regional settlements within a > 25-km radius. Tall el-Hammam may be the second oldest city/town destroyed by a cosmic airburst/impact, after Abu Hureyra, Syria, and possibly the earliest site with an oral tradition that was written down (Genesis). Tunguska-scale airbursts can devastate entire cities/regions and thus, pose a severe modern-day hazard.

“Since 2005, archeological excavations have been conducted at Tall el-Hammam (“TeH”), an ancient walled city in the southern Jordan Valley located northeast of the Dead Sea (Fig. 1). The ruins are situated in a part of the Great Rift Valley known as the Middle Ghor, defined as the southern end of the valley between Lake Tiberias, Israel at ~ 200 m below sea level (mbsl), and the Dead Sea at ~ 415 mbsl. This area represents the southernmost 25 km of the Jordan River drainage, where the valley floor north of the Dead Sea is a relatively flat and disk-like plain, called “the Kikkar of the Jordan” (hakikkar hayarden) in Hebrew1,2.”