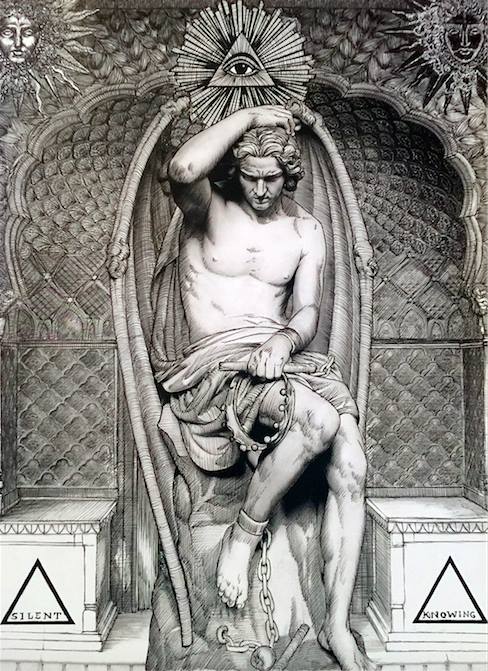 Collective777 members and collaborators, Jeff Martin and Robert Buratti of Lodge777 (Perth) have embarked on an artistic project to celebrate the 20th anniversary of The Tea Party’s classic album, ‘Edges of Twilight.’

The Edges of Twilight helped propel the band into mainstream success in their native Canada, where it reached double platinum status and earned the band several Juno nominations, including “Best Rock Album” and “Group of the Year”. The title of the album is taken from a chapter of the book Fire in the Head, by the American author Tom Cowan, which also inspired the name of the first track on the album.

To commemorate the 20th anniversary of The Edges of Twilight, The Tea Party released a deluxe remastered CD, remastered LP, and a North American tour. The deluxe CD also includes a bonus disc that includes alternate, live, radio sessions and bonus audio and the booklet features the story of the album with new band interviews and previously unseen photos.

In addition, the band commssioned the Perth-based artist, Robert Buratti to complete 12 original artworks and 12 short films (one for each song) which would form part of the live show. \

The Australian tour commences in Perth on 9th November before making its way across the country. See details at www.teaparty.com

The final touches on The Hierophant: Volume 2 are being completed with an impending launch later this month.

Sunrise at the Solstice: A Year in the Life of an Initiate

Freelance Artist and Illustrator, Mitchell is based in Melbourne, and inspired by a range of music, art, books on mythological, historical and occult, fantasy, steampunk and sci-fi themes, like Alchemy, Qabalah, Qlippoth, Enochian Magic, Tarot.

His work has been featured in numerous publications and he has collaborated with a range of musicians and writers, making him one of the most sought after artists in the genre.

C777 President appointed Curator for the City of Armadale

C777 President, Robert Buratti has been appointed the Curator for the City of Armadale and South Perth region. As part of this role he will be guiding government policy on cultural activity and the visual arts within the greater region of West Australia.

Under this portfolio he will also manage and deliver the Minnawurra Art Awards, one of the state’s oldest and most respected art awards.

Mysteria Maxima Media is the brainchild of C777 founders, Laith Tierney and Robert Buratti and will make it’s debut at Supanova in Adelaide this November.

The pair will be showcasing their first title “The Five” along with others currently in production.

The work of C777 member, Mitchell Nolte is featured on the cover of the current issue of ‘The Journal of Thelemic Studies: Volume III, Number 1’

The edition is a special issue devoted exclusively to the central public and privat rsite of Ordo Templi Orientis, Liber XV: The Gnostic Mass. This issue has over 15 articles from a diverse group of Thelemites writing on a wide variety of topics from the Creed, to magical energy in the Mass, to preparation of Cakes of Light, to music in the Mass, and more.

ANNETTE GRAY received a much sort after “Golden Ticket” to the 3 day Seven Sisters Festival (http://sevensistersfestival.com) in Victoria for her contribution of ‘La Descente’ to their art/poetry competition. The theme was transformation and the feminine.

ANNETTE GRAY recently started a new (and ongoing project) titled Divine Me 777, which is a very large project exploring the Table of Correspondences through photographic collaborations with individuals.

BARRY WILLIAM HALE has work on show as part of The Festival of Dark Arts in London.

ROBERT BURATTI named a finalist in the Brisbane Art Prize, for his work “Man Among Men” oil on canvas 100 x 75cm

The work resulting from the collaboration of Robert Buratti and The Tea Party will be on show in Perth, Western Australia in the month of November before heading to Sydney.