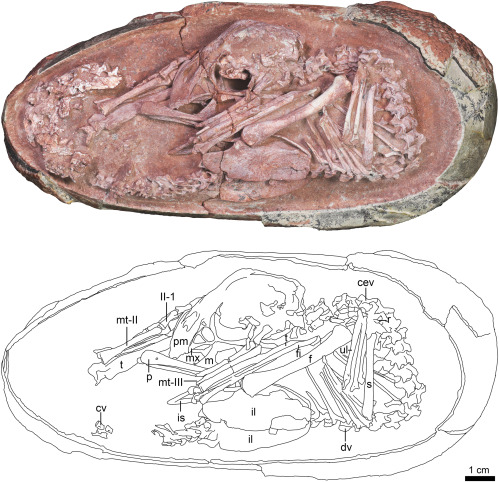 iScience Journal posted a paper regarding a dinosaur embryo found in a fossilized egg in which the dinosaur took a distinctive tucking position before hatching, a behavior previously consider unique to birds. Artist renderning of the embryo kinda resemble the Baby Baphomet The Satanic Temple installed in that state capitol rotunda don’t ya think?

Zelenitsky and Therrien, 2008; Varricchio and Jackson, 2016; Norell et al., 1995; Varricchio et al., 2002). Non-avian theropods possess a mixture of reproductive features, including some that are avian-like and seen in today’s birds, but others that are inherited from early reptilian ancestors or are unique features restricted to particular extinct dinosaur lineages (Horner, 2000; Zelenitsky, 2006; Yang et al., 2019b). Much of our knowledge on dinosaur reproduction has been developed from the study of eggs and embryos (if preserved), providing us with information on egg morphology and color, nest structure, nesting behavior, and early ontogeny / growth (e.g., Mikhailov, 2014; Tanaka et al., 2015; Wiemann et al., 2018; Yang et al., 2019b; Bi et al., 2021; Reisz et al., 2005; Norell et al., 2001).
“Skeletons of dinosaurs are rarely preserved in ovo, but these embryonic fossils are important records of dinosaur reproduction as an embryo documents stages of early growth and development up until hatching. As for preserved eggshells of dinosaurs (e.g., Varricchio et al., 2002; Zelenitsky et al., 2002), aspects of their embryos are logically comparable in an evolutionary framework with those of their closest living relatives crocodiles and birds, the three clades of which belong to a group of diapsids called Archosauria.

“With respect to in ovo embryonic posture, extant birds are known to have a degree of mobility, which allows them to develop different postures at different stages of development, and ultimately a characteristic tucking posture critical to successful hatching (Hamburger and Oppenheim, 1967; Hamburger, 1973; Oppenheim, 1973;

Brooks, 1978; Rideout, 2012). The back of the embryo is against the air cell in the blunt pole of the egg and the head is tucked under the right wing with the beak pointing toward the lower slope of air cell (Oppenheim, 1973; Rideout, 2012). Such a posture or degree of mobility has not been observed in other extant archosaurs, the crocodilians (Ferguson, 1985; Casey and Sleigh, 2001), which instead have a sitting posture with the head bending upon the chest up to hatching (Deraniyagala, 1939), but it is not clear if deviations from this posture would increase mortality.

“Owing to the scarcity of articulated dinosaur embryo fossils, it is unclear whether non-avian dinosaurs attained a bird-like posture before hatching, or were more similar to the ancestral archosaurian condition (i.e., as in living crocodiles, which we here presume to be plesiomorphic for Archosauria, although further evidence is needed from a range of tetrapods to determine the ancestral conditions of Archosauria and other clades). Although fossilized embryos of enantiornithine birds indicate that tucking behavior existed in the Cretaceous in early-diverging birds (

Elżanowski, 1981; Zhou and Zhang, 2004). The prehatching posture of non-avian dinosaurs has rarely been commented on. A partial embryo of an oviraptorid—a non-avian theropod closely related to birds—was described to have the same posture as crocodilians (Norell et al., 1994, Norell et al., 2001), but the reasoning was not explained in detail. More in-depth comparative study from more recent discoveries is needed to illuminate the largely unexplored prehatching behavior of non-avian dinosaurs.
“In this study, we describe a new non-avian theropod dinosaur embryo exquisitely preserved inside an egg, from the Late Cretaceous Hekou Formation of southern China. This articulated specimen is one of the most complete non-avian dinosaur embryos yet discovered, permitting detailed anatomical study and an unprecedented glimpse at the osteology of an in-ovo bird-like, but non-avian, theropod dinosaur. A comparison with the embryos of closely related taxa and extant archosaurs allows us to hypothesize aspects of prehatching behavior. Most importantly, we observe that oviraptorid embryos appear to take on aspects of avian-like tucking postures, and we propose that this prehatching behavior evolved prior to the origin of birds.”
Don’t be lazy – read the whole paper 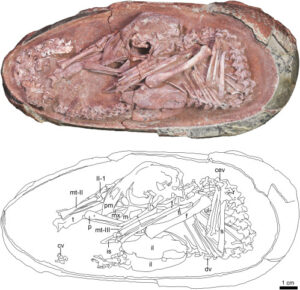