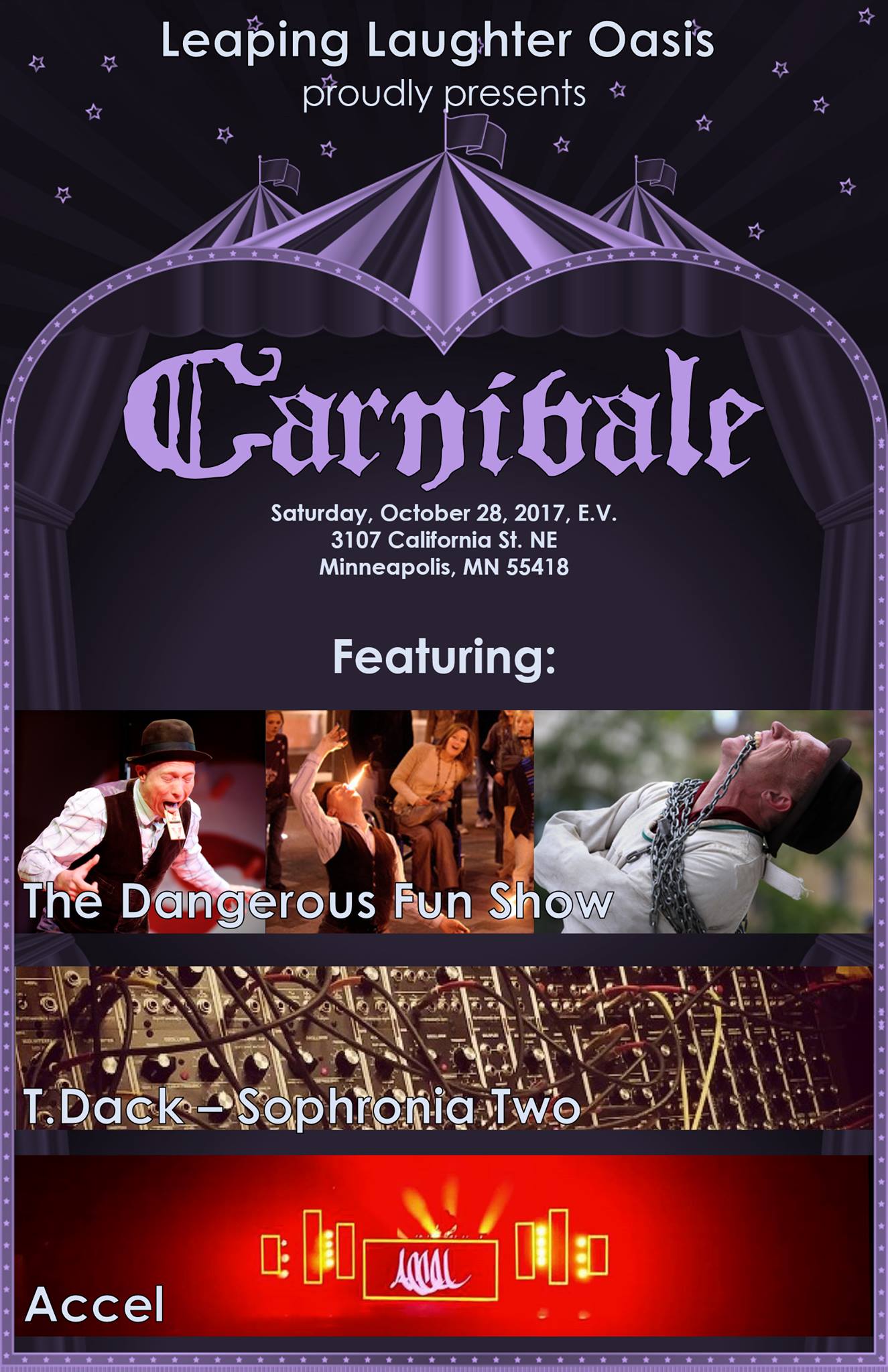 Josh Peters, a local brother at Leaping Laughter Oasis, is a stage performer who presents The Dangerous Fun Show, a presentation of daring acts designed to thrill and excite audiences, reminiscent of the side show acts of days gone by. He swallows swords, walks on glass, eats and breathes fire, escapes from straight jackets, and provides thrills and chills for people of all ages.

He offered to do a show for the lodge as a fund raising event, and we brainstormed on the topic and came up with the idea of Carnivale, an event we’re holding October 28th, 2017 e.v. at the Oasis here in Minneapolis. You should totally come.

The evening’s entertainment now includes Tobin Dack, presenting Sophronia Two, a digital multi-media presentation originally commissioned for the Walker Art Museum. There will be circus-themed graphics projected on a huge wall of the temple space, with live music performed by Tobin. Google Sophronia Two to get a better understanding of the twin-cities concept art that formed the piece, and check out Tobin’s musick stylings, it’s going to be amazing.

In addition, Accel, the amazing DJ responsible for the absolute blow-out celebration at the O.T.O. Women’s Symposium will be presenting his original work for us as the closing act. I have no idea what he’s going to make happen, but I’ve seen him perform often enough to know it’s going to be amazing. I’ve been listening to his musick to get a better idea of how to promote him on the flyers, and it’s hard for me to describe. I want to say it’s like rave/trance ambient beats and mixes, but that sells it way too short.

Suffice it to say, the party kicks off with an amazing side show act, moves to a circus-themed ambient artistic presentation that the artist says will be perfect for playing while people observe, mix, mingle, and drink, and will close out with a rave. We’ll be having tarot readings in the Diviner’s Tent (the Oasis Library has consented  to be transformed for the evening) throughout the night, and we plan to have games and booths, and local artist’s work on display. I’ll be bringing my print of the Muse, by Paul Ruckner, and we’re arranging other similarly themed works to have on display as well.

It will, of course, be a Masquerade, with all costumes welcome, and as a fund raiser, we’ll have all kinds of swag for sale to support the local body.

All summer long, we’ve been participating in our Summer of Promulgation, with a suite at Paganicon, booths at Twin Cities Pride Festival and Pagan Pride, and the creation of the Thelema 101 youth outreach program. This event is not about promulgation. This is just a friggin’ party, to celebrate our success, to reward our hard work, and to have a great freaking time.

So step right up, ladies and gentlemen, non-binaries and something in between, see the man snap a mousetrap on his tongue, experience the half-city that moves as the seasons change, and partake of wine and strange … things as you party down with Thelemites exercising their Wills, on purpose!

What could possibly go …