“All exterior surfaces of the [jar] were originally covered with text; it once carried over 55 inscribed names, dozens of which now survive only as scattered, floating letters or faint stylus strokes” Lamont wrote, noting that the Greek writing contains words that may mean “we bind.” The nail and chicken parts likely played a role in the curse. Nails are commonly found with ancient curses and “had an inhibiting force and symbolically immobilized or restrained the faculties of [the curse’s] victims,” Lamont wrote. 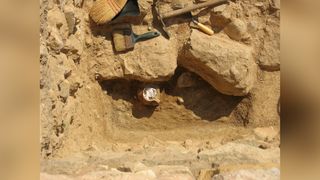