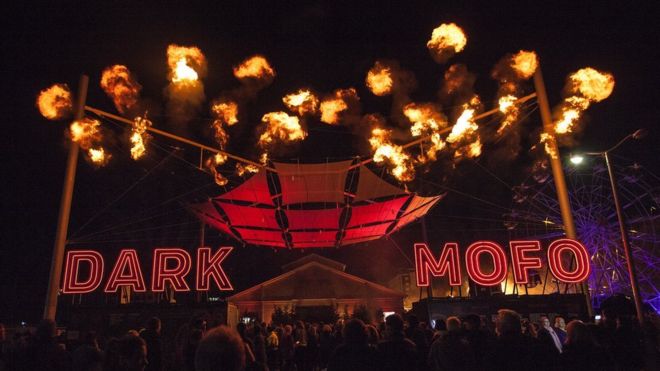 As Aleister Crowley stated in several instances, ancient man misconstrued the apparent changing aspects of the Sun as the Earth orbits around it as indicating the it’s actual weakening and death, this being analoguous to longstanding misunderstanding of the fate of incarnate human beings. And while most of mankind (though not necessarily all) currently realize that the Sun does not actually die and get reborn some still celebrate it’s “passing” based on bygone myths – Hannukah, Christmas etc. being examples of same.

June 20 is Summer Solstice in the Northern Hemisphere but in the Southern it marks Winter Solstice. Here’s an article of an Australian festival of death & darkness. It starts:

“When winter comes and the longest night of the year draws near, Australia’s most intense public art festival makes the most of the darkness.

“An offshoot of Hobart’s lauded Museum of Old and New Art (MONA), the Dark Mofo festival uses the winter solstice to explore ancient and contemporary mythologies around death.

“Its programme of art, theatre, music, film and food stretches across 12 days. Key events include the Funeral Party, a gothic ball held in a funeral parlour, and Hymns to the Dead, a concert featuring some of the world’s heaviest black and death metal bands.” Read the entire article here