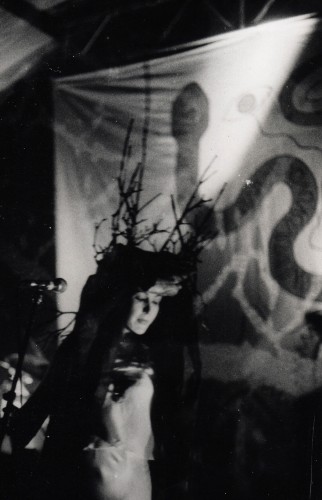 Amodali has announced the publication later in 205 of ‘The Marks of Teth’ by Three Hands Press. She explains that the book “documents 25 years of research and practice within the sphere of sex magic. The phenomenological and metaphysical structure of the female ‘magical body’, is often obscured and fragmented within western esoteric culture. However, as a result of the 19th Century occult revival, women are now exploring esoteric sexuality as a defiantly independent spiritual path and a body-centred spiritual epistemology is slowly gathering force. The Marks of Teth proposes a post-thelemic interpretation of the goddess Babalon that expresses a feminine magical signifying language which is wholly erotic and evolutionary. The book reinforces the primacy of embodiment within multidimensional esoteric disciplines and enquiry, interpreting the occult anatomy of the female body as an autopoietic construction with its own defining initiatic imperatives.”

You can read an extended interview with her by Three Hands Press here: http://www.threehandspress.com/amodali_interview

and a fascinating essay by her here:  http://www.amodali.com/babalon-ritual-phenomenolgy/

Since first posting this we’ve heard from the author who notes:  “just a quick update on the progress of The Marks of Teth The book is still being edited, announcements on a definitive publishing date will follow in the not too distant future.